This is my entry to Techie She’s Lucky Blogger Weekly Giveaways Week 9. This week’s prize is $10 paypal credits from Lainy of Lainy’s Musings.

I guess you’ve probably figured out by now that we are a bunch Harry Potter rabids! What with me writing my musing about it here + there. +, if by chance you were just the same, you might as well check out this latest offering from our favorite author, JK Rowling on Pottermore.

I have been a follower of both the books + the films for almost a decade now + it seems to have been one of the most endearing adventures I have ever taken on. Every time I revisited a chapter (I have read the books several times over) + watch a film (we’ve also watched the first 6 films countless of times, Jared’s dad is even complaining “Harry Potter na naman?!” (Harry Potter, again?!) whenever I’d tell him exactly what we’re doing after he’d popped the question

+ to know that we will be seeing the last of the films + thinking we won’t have any new ones to look out for or even a new book to wait for, brings bittersweet emotions. We will surely miss Harry Potter + the rest of the gang. We have practically became friends the first time we accompanied Harry on his very first trip at the Hogwarts Express + it is always very heartbreaking to say goodbye to an old friend.

I anticipated the much-awaited conclusion to this epic saga with mixed emotion, knowing that Harry did manage to win the heart of gazillions of fans the world over + succeeded to make converts out of all of us + aware that there will be no more sleepless nights waiting for a film premiere or a book release.

So when we trooped to the mall on the 16th to watch Harry on the big screen for the last time (my bro, Ken, who is the most addict of all of us, has seen the last film 3 times + is planning to see it on IMAX soon!), I was both jovial + melancholic. It turned out that the screening on IMAX was fully-booked until 8pm so I settled with the 3D one. I watched it with my cousin, Dennis, whilst my sis, Cecille roamed around the mall with my little one in tow. My 2 other siblings watched it a screening earlier.

We decided to take our lunch first before we went straight to the cinema + since I am with the little man, I decided to go to Kenny Rogers (my baby loved their soup there, so I am sure he’ll eat solids when we dine there

) + since it is a sale weekend, queues are long + it even took a longer time to wait for tables to be empty. Just so we can eat right away, we shared tables with a lonesome man sitting on a table for 4. Am only glad he did not mind!

As expected Jared did eat quite a number of spoonful + I could not be happier. He particularly favored their Chicken soup so I make it a point to stop by every so often so he can have some. We finished our lunch a few minutes shy of 2pm which is the screening time for Harry Potter + the Deathly Hallows Part 2. So my cousin + I rushed to the cinema so as not to be late.

Well, it turned out we were late indeed + the screening time originally slated at 2pm started a little earlier. I was very disappointed as my cousin even asked the usherette if the film has started yet + she said no, she even failed to give us our 3D glasses. It was a good thing we came back + asked to be seated to our reserved seating as the cinema is pitch black since the film has started already. But not after missing the opening part of the film, dang it! Well, at least we’ve managed to snap a photo of me in front of the movie posters (my only consolation in this mishap, but I can’t find the photo now so I’ll ask my cuz to send it again so I can post it here!)

The film is everything I’ve ever imagined it to be. Thanks to the producers and the director for keeping it as much as how it is done in the book. I simply love the film. I am glad to see my favorite, Sirius Black, returning one last time as a ghost. I also love the dueling part between Molly + Bellatrix, + that part where Professor McGonagall told Harry that she was glad to see him. It was really touching. A lot of the parts in this film are touching, maybe because I am aware that I will be seeing all of them for the last time.

My most favorite part would have to be the triumph of Neville Longbottom against the snake, Nagini. Neville is one of my most favorite characters + am only glad he was given the proper exposure this time around, it is a welcome change from the usual comic relief role he was assigned to on several films past (some of those scenes are not even part of the book

) It was only Voldemort’s decision that saved Neville from the fate that is now Harry’s, but it does not mean he suffered less. It would have been great if the films showed his parents, though, who have been living in St. Mungo’s Hospital ever since  Bellatrix Lestrange set the Cruciatus Curse on them, the scene between Neville + his mum would have been a classic…

I love the film, I love how they depicted every part of the last book in this epic series + sometimes, I just can’t help but wish that one day JK would wake up with Harry Potter creative juice flowing again + she’d decide to write another book. Another one depicting how each character is doing 19 years after, in full detail, maybe..oh, well, maybe I can just keep on wishing

A much as I hate goodbyes, I shall never say goodbye to Harry since I shall be seeing the film again (hopefully soon so I can catch it in the big screen one more time!) and will be revisiting the books one of these days when my time will allow me. I also look forward to reading these books as bedtime stories + watching the movies endless of times in my computer, when Jared is a bit older + has discovered his passion for Harry Potter, too!

So, yeah, definitely no goodbyes, just “See you later.” 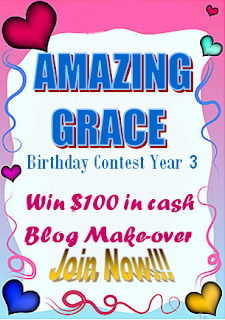 Amazing Grace is giving away the following prizes to celebrate her 44th birthday this year:

Here’s how to join:

This is just a very brief post to let you know there will be silence from this end for awhile…well, at least until Incubus‘ Big Dome concert is over…I shall be heading South-bound in a few hours to watch my favorite band again + I am just so, so excited! Good thing Ken agreed to look after my little man while I am away, thanks bro, I owe you one!

I only wish I can tag Jared + Jared’s dad along but I will be with my two sissies who were lucky enough to win 2 tickets for later’s event.

It is 5 hours before the much-anticipated show of the year + this mum needs to get ready, so I’ll be seeing you in awhile.

For now, I leave you with an invitation to sign up as sponsors to my son’s blog. I am cooking up something for our birthday month next month + I do hope you will join us. Thank you in advance

Have a wonderful Thursday everyone, I sure will!

Every year I look forward to my birthdays (well, who doesn’t, really?) + there simply is no need for grand celebrations or lavish gifts, just the thought of being given another year to enjoy life here on Earth is more than a reason enough to celebrate + be thankful.

I guess the best birthdays I have ever had are the ones I celebrated with my parents around. Not because these are grand celebration ’cause normally my Mama would just cook her specialty + my favorite, spaghetti (which happens to be soooo delicious, if you ask me, the best!) if I get lucky + we would just stay at home all day, doing practically nothing! Nothing really fancy, but I guess those simple pleasures are worth a ton of treasure, especially now that I can no longer spend my birthday with them (well, the ones spent visiting their graves aren’t really counted, right?

I also enjoyed that one birthday when my officemates threw a surprise party for me. I was genuinely surprised + was touched by the gesture + the thought.

Now that my son is around, instead of dwelling on the happy memories that bring mixed emotions, I plan to create new happy + unforgettable experiences with Jared + no, not with expensive presents but little, random, unexpected moments that creates lasting memories.

Now it is your turn to share your best birthday celebration ever here.

Being a first time car owner is such an exciting … END_OF_DOCUMENT_TOKEN_TO_BE_REPLACED