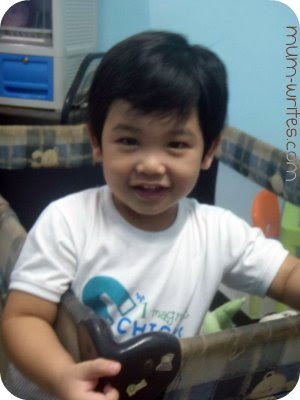 Sorry I know you were suppose to stop counting the months once they turn a year old, but I can’t seem to kick the old habit! Anyway, we celebrated by going to the movies + see the little man’s favorite ad on the tellie by far, Enteng Ng Ina Mo {I will tell you more about the movie experience in a separate post :)}.

Jared is slowly discovering his gift of gab + is such a chatterbox now more than ever. Here are a few of his weird + funny words {with their corresponding interpretations as your guide ^_^}

His vocabulary + speaking has greatly improved in several months + I couldn’t be a prouder mum. Apart from that he can now distinguish {+ say them clearly, too} letters A to J with the addition of letter O. He can also count from 1 to 10,  recite the names of his stuffed toy friends, and recall the sound made by the following animals: dog, cat, tiger, frog, + bird {we’ve also included fish into the fray, which makes the “swim, swim” sound :)}

A few words added into his vocabulary includes: moon, star, daddy, fish, ball, + apple. I know he will learn a whole lot more new things next year + I couldn’t be more excited! 😀

Here Are 10 Things To Do After The Papal Visit