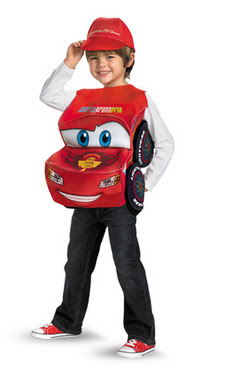 I know that Halloween is not due until the last week of October, but I just thought it would be best to scout for a great costume for the little man this early, plus am also contemplating on having him wear a Lightning McQueen costume on his 3rd birthday celebration. I reckon nothing beats an early bird, plus it allows more time for Jared to give his costume a try so that he will be all set by the time he needs to wear them. Not to mention, costumes cost a lot cheaper now compared to a few months later when the Halloween fever sets in.
If truth be told, I wasn’t really that encouraged to get a costume for my little tot when he was younger. I remember he’d fuss over a head piece when we went to look around for a Halloween costume last year. In the end, I dressed him in plain clothes since he really refused to try anything out! Maybe he is still a bit younger + all the hoopla is just too much for him-.
This year, though, I thought since he’s getting really bigger + more mature, I think he’d be more open to try a costume out. Especially if I can find him something like that one on the photo.  He absolutely adores anything Lightning McQueen + I reckon it will be much easier to convince him to try a costume like this! I’ve found it on Spirithalloween.com, by the way. They have a got a lot of interesting Cars costumes in their collection, as well as numerous costume ideas for women! Who knows, maybe I can also find one for myself + we’d go on matching costumes to celebrate Halloween later this year. Oh well, all I need now is some fund on my Paypal account so I buy this one + my little man will be all set! 😉
image is not mine

of freetimes + being single