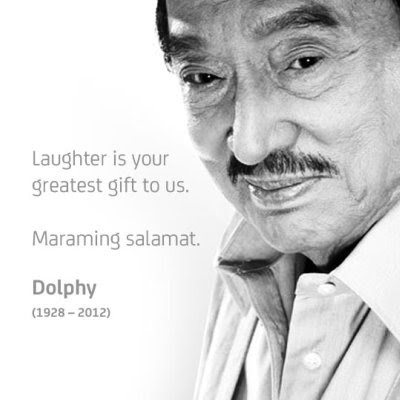 I will always remember those Wednesday evenings spent in front of our tellie, while the rest of the family, including my Papa, who is always away the entire week for work + only gets to be home on Wednesdays + weekends, watching the antics of Kevin Cosme + his brood of 5, in the ABS-CBN sitcom, Home Along The Riles. It was one of those few programs on the tellie that we all enjoyed watching. I guess my old man can relate to Kevin’s struggle to be a good father + to provide for his family, even when times are hard + the family is poor. He must’ve found Kevin’s uncanny ability to laugh + smile even in the midst of problems + adversities to be utterly inspiring. An episode even made him cry one time. I guess, in ways even I cannot decipher, Dolphy will always remind me of my father.

The Comedy King, through the beautiful characters he portrayed, in an illustrious career that spanned several decades, epitomizes the Filipinos’ resiliency when faced with challenges + it is what endeared him to the hearts of many of his countryman the world over. No wonder the whole nation joins his family in mourning + celebrating the beautiful person that he was, when he joined the Creator on Wednesday, 11 July. He has been battling with Chronic Obstructive Pulmonary Disease (COPD) + of late, its complications, for 5 years now. Flags all over Metro Manila are in half-mast, too.

Family, friends + fans alike trooped to the Dolphy Theater in Quezon City to pay their last homage to the man who made them smile + touched their lives. The outpouring of support was carried on when the remains of Dolphy were brought to the Heritage Park in Taguig. The demise of the Comedy King is a loss, not only to his family + friends, to his supporters, to his fellow Bulakeños, but also to everyone of us who grew up watching all his films + television programs. I know that his memory will linger on long after he has meet our Maker. Public viewing at the Heritage Park is is scheduled until Saturday, between 8am-3pm. As of this writing, the President even went on to declare July 13 as the National Day of Remembrance in honor of Dolphy.

To his family + to everyone who will miss the Comedy King, our condolences….