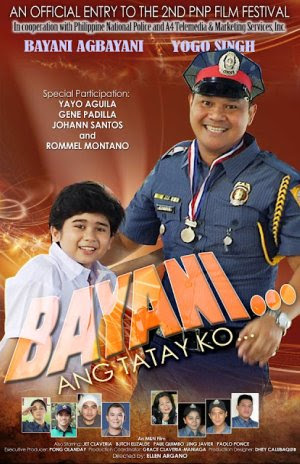 Watching movies over the weekend is one of my family’s favorite activities, especially if there is a particularly nice + kid-friendly film showing on our favorite cinema. A perfect example of such film is M+N Films’ Bayani Ang Tatay Ko, an official entry to the 2nd PNP Film Festival. It will have its premiere screening on August 5, 2012, Sunday at SM City-North Edsa Cinema 5, at 5PM.
Bayani Ang Tatay Ko in a nut shell:
It is an indie film about life, its struggles… it’s about presenting life’s most vivid moments with the people we love. This film not only aims to instill sound family values but also provide entertainment + at the same time honors the law enforcers.
Seasoned actor-comedian Bayani Agbayani give life to the role of  SPO3 Nicanor Corpuz , a decorated cop, loving dad + husband to his wife Susan + son Adrian. They live a simple, happy life until their lives took an ugly turn because of one unfortunate incident, where Nick was suspended from service + he turned to selling “isaw” to make ends meet.  This is where the adventures began!
This is a classic example of how a typical Filipino family face these challenges in a comedic and a bit of dramatic way with a sting of action to highlight the story. Something we all would like to see, I think!
Joining the cast are Yayo Aguila, Gene Padilla, child actor Yogo Singh, Johann Santos + Rommel Montano.
Watch it over the weekend:
Watching this film is one perfect way we can salute the gentle officers… the all-time “bayani” of every community, those who perform heroic deed if need be + who works hard to continuously protect the common public interest, while maintaining peace + order, too.