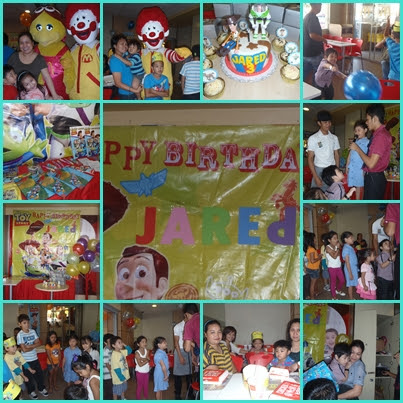 It was no easy feat to throw a birthday bash, may that be for a group of 40 people or 80, but it was something you’d like to do all over again if only for the precious look on the birthday celebrant while his party is in progress! ^_^

I know it has been about 2 weeks since the little one’s birthday celebration at McDonald’s but I have not been free enough to tell you all about it, except for the quick post we have down at Jared’s Little Corner. I’d say that sans the little hitch, like Jared’s tantrums {due to the annoying loud music, which he is not too fond of} + the little mishap about Jared’s gifts + the piñata {the crew forgot to give us the present which was originally included in the package + they also forgot to bring out the piñata during the party, that we have to go back + get them}, we actually had a wonderful simple party where everyone enjoyed! 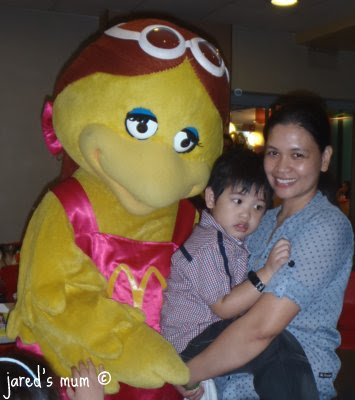 The little ones had a wonderful time playing the games + dancing, not to mention taking photos, with Birdie + Ronald, who shared the special day with us! The little man was his usual playful self when we arrived to the party venue, but given that he’s not been down to take his afternoon nap, by the time were starting the party he was already cranky + as grumpy as an old man! It was a good thing everyone is present so we took turns carrying + soothing him.

Our little Woody + Buzz cake also stole the show + I cannot thank sis Iris enough for this wonderful creation + for the set of Toy Story toys she’d thrown in with the cake + cupcake package! ^_^

Time does fly quickly, the 2-hour party was over soon + my little man is officially a 3-year old! We thank everyone who went out of their way to join us in this momentous celebration, especially for those who had to travel far just to get to our far-flung city. More than your gifts, it was the time you spent with us on this special day that made it all the more special + which warmed our hearts even more!

saturday 9: will you still love me tomorrow?