Untimed by Andy Gavin is Finally Out! 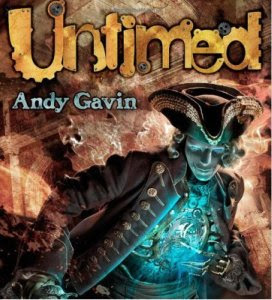 Author Andy Gavin’s new release, Untimed,  is finally out! Get ready for a Young Adult time travel adventure that will have the hours flying by without you noticing it!

Untimed in a nutshell:

Charlie falls through holes in time,  no one remembers his name, not even his own mother, and a clockwork man is trying to kill him. If they do not let Ben Franklin get killed, there is an Eighteenth Century Scottish girl who can bring him back home.

As if that weren’t enough, when a mysterious clockwork man tries to kill him in modern day Philadelphia, and they tumble through a hole into 1725 London, Charlie realizes even the laws of time don’t take him seriously.

Still, this isn’t all bad. In fact, there’s this girl, another time traveler, who not only remembers his name, but might even like him! Unfortunately, Yvaine carries more than her share of baggage: like a baby boy and at least two ex-boyfriends! One’s famous, the other’s murderous, and Charlie doesn’t know who is the bigger problem.
When one kills the other — and the other is nineteen year-old Ben Franklin — things get really crazy. Can their relationship survive? Can the future? Charlie and Yvaine are time travelers, they can fix this — theoretically — but the rules are complicated and the stakes are history as we know it.
And there’s one more wrinkle: he can only travel into the past, and she can only travel into the future!

Andy Gavin, the same author who first gave us the dark fantasy novel, The Darkening Dream, well-received by fans and critics alike, is a prolific storyteller who founded the video game developer Naughty Dog, Inc. at the age of fifteen, where he produced and directed over a dozen video games, including the award-winning and bestselling Crash Bandicoot and Jak & Daxter franchises, which sold over 40 million units worldwide. He studied at M.I.T. for his Ph.D. and sleeps little, reads novels and histories, watches media obsessively, travels, and of course, writes.

You can learn more about Andy Gavin at: https://andy-gavin-author.com