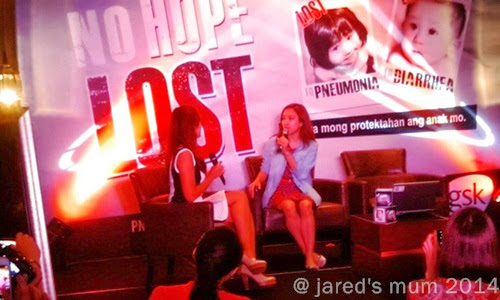 I was fortunate to join fellow mum bloggers and other people from traditional media to witness the launch of GSK’s No Hope Lost Campaign held at the Makati Shangril-la’s Paranaque AB Hall earlier this month. The event was graced by Barbie’s Cradle vocalist, mum Barbie Almalbis, who shared her scary experience when one of her children got hospitalized due to pneumonia. Also present in the event is resource person, Dr. Sally Gatchalian, Director of the Philippine Foundation for Vaccination, who enlightened us about the importance of having our children vaccinated, as well as clarified certain myths about vaccines and vaccination.

Pneumonia and diarrhea are the top 2 leading causes of mortality among Filipino children less than 5 years of age and the scenario is very much similar with the rest of the world. Losing a child is the most-heartbreaking experience any mother could ever have, it is beyond imaginable, in fact, that thankfully parents, and society in general, is doing anything to prevent the loss of their children. It is also good to know that both diseases can be prevented through vaccination.

Pneumonia in a nutshell

An estimated 37 Filipino children die of pneumonia every single day. It is, in fact, the single greatest cause of death in children less than 5 years old worldwide. Pneumonia is an inflammatory condition of the lung that primarily affects the microscopic air sacs alveoli. This is an infection caused by the bacterium S. pneumoniae, or what is popularly known as pneumococcus, which in turn can lead to life-threatening conditions such as pneumonia. This bacterium can also result to Acute Otitis Media {or AOM}, a common and highly prevalent ear infection. When pneumococcus invades the blood, it can also result to severe medical conditions such as meningitis, complicated pneumonia, as well as sepsis or blood poisoning. These invasive forms of the pneumococcal disease are categorize into Invasive Pneumococcal Disease or IPD}.

Symptoms of pneumonia include:

Diarrhea in a nutshell

Diarrhea is the second leading killer of children under 5 years of age globally. There is a registered 1.4 million child deaths yearly because of this disease. The common cause of diarrhea and severe dehydration in young children is Rotavirus Gastroenteritis {RVGE}. This is also the leading cause of diarrheal hospitalization and deaths among children and is considered most severe in infants aged 3-24 months.

Rotavirus is dubbed as a “democratic virus,” affecting virtually every child during the first 5 years of life, regardless of race or socio-economic status. In the Philippines, diarrhea is the second leading cause of child mortality resulting to more than 13 Filipino children dying due to diarrhea every day, or to almost 5,000 deaths yearly.

Prevention is Better Than Cure

Early protection is the key to prevent penumonia and rotavirus disease. No child has to die because of these diseases as they are both highly-preventable. Raising awareness about these diseases is a very effective way to combat them and hopefully eradicate them in the future.

Ways to Protect Children Against Pneumomia and Diarrhea:

Available Vaccines for Pneumonia and Diarrhea

The Philippine government, acknowledging the burden of these death-causing diseases, introduced Rotavirus Vaccine {RV} in 2012 in the Expanded Program on Immunization {EIP} and facilitated for 700,00 Filipino children aged 6 months of age to be given free rotavirus vaccines. The Pneumococcal Conjugate Vaccine {PCV}, on the other hand, was introduced in the EPI in 2013 by the Department of Health {DOH}. The Philippine is the first ASEAN country to introduce both vaccines in the EPI.

This combined effort to protect Filipino children against these killer diseases immensely contributed to the achievement of Millennium Development Goal {MDG} 4 to reduce infant and child mortality by 2/3 by 2015. 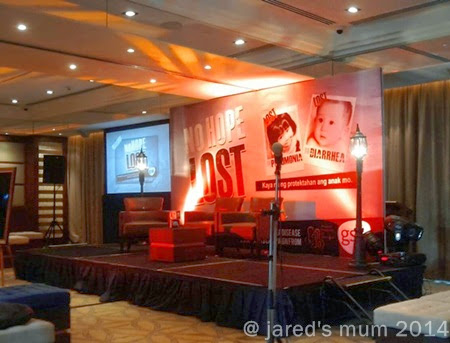 GSK, one of the world’s leading research-based pharmaceutical and healthcare companies, continues to be a committed partner of both private healthcare practitioners and the government in their fight against childhood diseases, death and suffering around the world by offering health solutions for the reduction of overall diseases, as well as supplying high quality vaccines.

In line with this commitment, GSK launched the No Hope Lost campaign that embodies the need for immediate action to get children vaccinated against pneumonia and diarrhea. It will also be launched through radio ads, print notices, flyers and posters soon.

In the same manner, GSK encouraged the media to join them in this worthy battle of fighting pneumonia and diarrhea.

After the enlightening lecture from Dr. Gatchalian and the insightful share of Barbie Almalbis-Honasan about her terrifying experience, members of the audience, most of whom are mums like myself, are encouraged to sign and put our pictures onto their No Hope Lost board to show our support to this worthy cause.

It does pay to be in the know and as mums, who only want what is best for our children, we must always update ourselves with recent vaccines and current medical news and development to ensure our children’s health and well-being. Now is probably the best time to keep in touch with your pediatrician to ask more about the Pneumococcal and Rotavirus vaccines and have your children vaccinated.