Side A Kicks Off Robinsons Malls’ Soundbites Music Festival

It was one of those rare occasions when this mum gets to have a day off on a Saturday and went on to pursue a couple of things related to my passion ~ reading and music. I shall share all about the reading bit of my weekend off in a separate post. Meanwhile, let me share about my music experience at the Robinsons Malls’ Soundbites Music Festival.

One of my favorite local bands, Side A, kicks off this year’s Soundbites Music Festival at Robinsons Magnolia. It was my first time in this Robinsons Mall branch but I never had the difficulty locating the al fresco garden where the show is slated that day. I arrived at the venue a little past 6pm and everything was set up and just about ready for the show to start. A dinner feast was also prepared for VIP guests and I did enjoy the pesto pasta, as well as the beef salpicao and the desserts that was prepared for us. 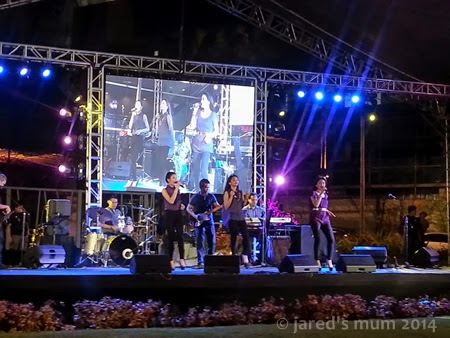 The lovely lady trio of Silk opened the show with lively current tunes, most of which I hardly recognize given that it has been ages since I have listened to the radio or watched MTV. But familiar or not, I did enjoy their repertoire. They even included a couple of hits from the 80’s much to the delight of older people  in the audience.

After the first set, a fun contest was held and members of the audience were asked to join. It was a pizza-eating contest and the boys group won over the girls group. The contestants all went home with gifts from Robinsons Malls. 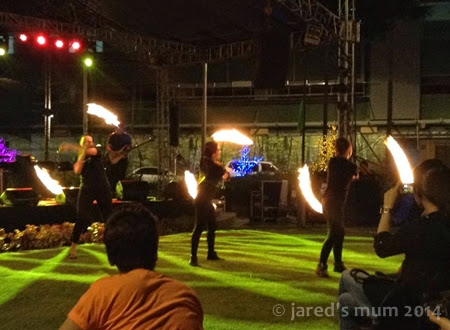 Another exciting performance followed and this time around a group of dancers called Fireflies gave a very enthralling dance number/object manipulation. Apart from their cool dance moves, they wowed the audience with their skills at manipulating a hula hoop and balls fire! I have never seen something like this before so I was really captivated by their performance. 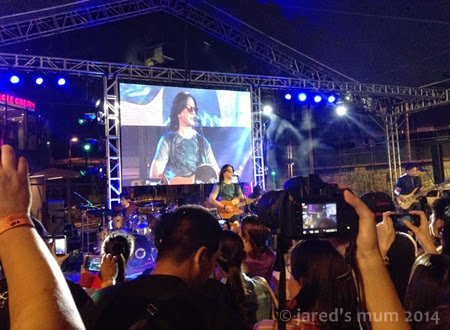 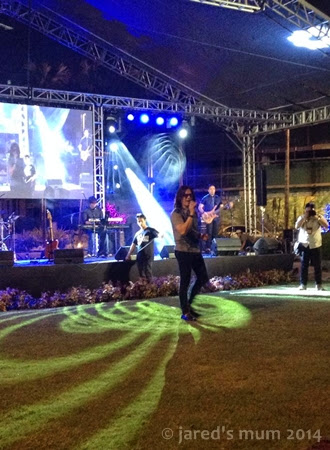 Finally, the moment everyone in the crowd is waiting for came. Side A was introduced and they kicked off their set by playing one of their most memorable and famous hits, Set You Free, much to the cheering of the anticipating crowd. They played one hit after another, each song as familiar to the audience as the next. I was being nostalgic listening to some of my old-time favorites and I just realized that I have been listening to Side A since I was in high school and it has been like oh so many years ago! Before I became a huge fan of great foreign alternative bands, Incubus and The Goo Goo Dolls, I was a huge fan of Side A, that is why it is no wonder that I know most of their songs by heart and I still memorize a lot of the lyrics until now. My favorite performance of the night will have to be the time they sang Only You, Sana Naman and the classics Foolish Heart and Fra Lippo Lippi’s Later.

It sure was one amazing experience and a Saturday off well-spent, especially when I get to sit in the front row and when the VIP guests got the chance to have their photos taken with the band after the show! I have never seen Side A performed live before and this sure is quite a treat! Also, I realized how much I missed watching shows and concerts until now and even though it is no longer a priority, I will see to it that I grab every chance I get to enjoy a good concert or show from time to time. And speaking of grabbing the chance to enjoy a concert, Soundbites Music Festival will run all weekend of May at selected Robinsons Malls branches and to get your free entrance tags all you have to do is dine in at participating restaurants and present your receipt with a minimum purchase of Php500.

Here is the line up of the upcoming weekend shows:

You may check out the list of the participating restaurants, as well as the complete mechanics of the promo, here.

For more information, kindly do any or all of the following:

Are You Watching My Bebelove: Kilig Pa More At The MMFF 2015?