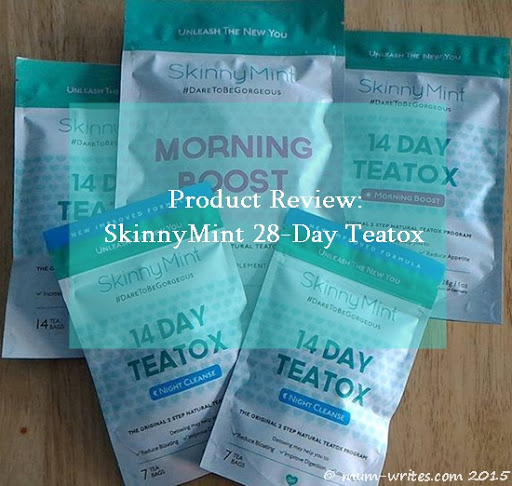 I recently tried teatox and I did love the experience, although I really thought it would’ve been better if the product comes with a guide of some sort to help teatox noobies like me on how to go about it, especially for those who planned on using it for losing weight. It was a great experience, nevertheless, and was also the reason why I immediately agreed to try SkinnyMint Teatox! 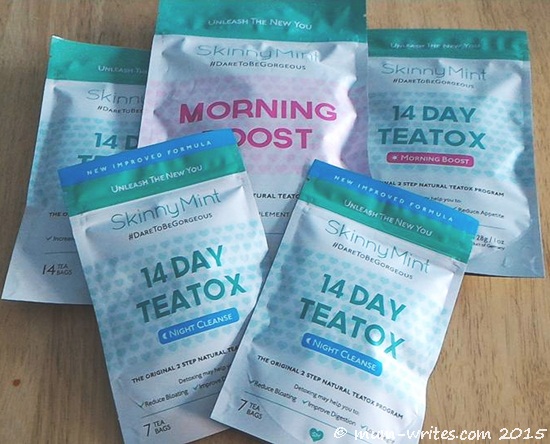 I was sent a SkinnyMint teatox package consists of the following:

Apart from the bags of 100% natural tea blended in Germany, the package also comes with a Journey Calendar and a pamphlet chock-full of tips and suggestions to make your teatox journey a rousing success.

Before I give you a detailed description of the original 2-step teatox program, let me share this 5 tips that will help you make the most out of your teatox: 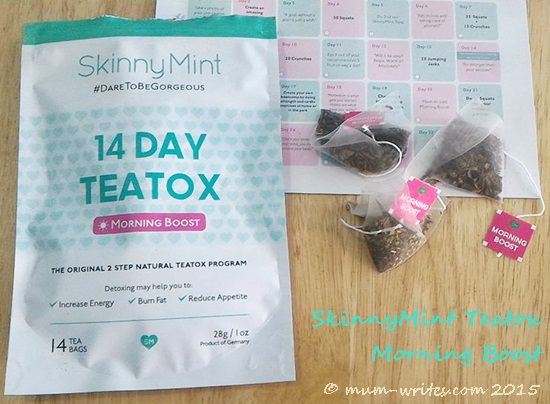 The Morning Boost Teatox is to be consumed in the morning before or during breakfast. It contains caffeine so it is not recommended to be taken after 5pm.

Here are its all-natural ingredients:

This blend also has a hint of grapefruit, strawberry, and pineapple making it even yummier, which I absolutely love! I prepare a glass each morning before breakfast as a great way to start my day or have it while eating my first meal of the day. Just like most teas, preparing the Morning Boost tea is as simple as dipping a bag in nearly boiling water and leaving it to steep for about 4-5 minutes. As it name suggests, it promises to help kick-start the day with extra energy.

SkinnyMint Night Cleanse in a nutshell 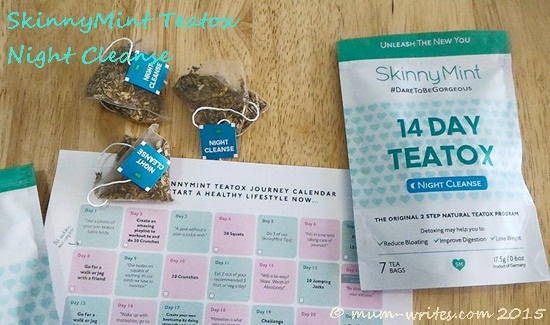 The Night Cleanse promises to cleanse and revitalize the body. It is to be taken every other night, starting from Day 1 of your teatox, after the last meal. The packaging suggests that it has a gentle laxative effect to naturally cleanse and detoxify the body. To prepare, simply dunk a bag in a mug of nearly boiling water, leaving it to steep for 2-3 minutes.

The goodness of the Night Cleanse lies in its all-natural ingredients that include:

The Night Cleanse also has a hint of peppermint, Hawthorn Berry, as well as Psyllium Husk, making it even more effective.

There are 3 different packs to choose from for those who plan to order their very own SkinnyMint Teatox. For those who are trying out the product for the first time, they can opt for the 12-Day Starter Teatox Pack {$29.90}, or those who would like to jumpstart their 28-Day Teatox right away, can choose the 28-Day Ultimate Teatox Pack, while those doing teatox with their family members or girlfriends, can opt for the Besties Value Teatox Pack {$89.90 and consists of 2 28-Day teatox}. Visit  skinnymint.com or click on the image above if you want to order your very own SkinnyMint Teatox Pack! 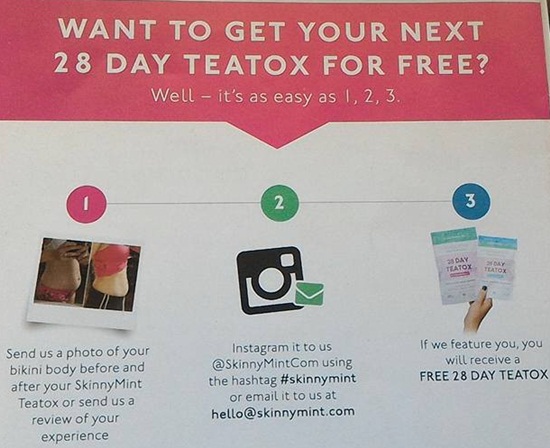 For your chance to get your next 28-Day Teatox for free, simply follow the 3 easy steps pictured above. To get inspiration from fellow SkinnyMint Teatox enthusiasts, and to know more about their products, you might also want to follow them here:

What you’ll love about SkinnyMint Teatox

Enjoying my new morning routine whilst drawing the lucky winners for our Unilab Health Kit Giveaway! A review of the #SkinnyMint Teatox will be up on the blog soon. #daretobegorgeous #detox #teas #healthandwellness

I did the SkinnyMint Morning Boost and Night Cleanse teatox for 10 days straight and while I was taking it, I notice the additional boost of energy in the morning, ideal for a busy mum like me who need the extra boost in the morning to perform numerous tasks before fetching the little one from school before lunch time. I take a cup in the morning before or while breakfast and I notice that I feel fuller longer, enough to go on without any meals at least until 11am!

With the Night Cleanse, on the other hand, I did notice having a better sleep on nights I was taking it. I also notice my reduced appetite, I was taking in less food than my usual fare. The packaging mentioned a gentle laxative effect, but I did not experience such, probably because my bowel movement is as regular as can be and I have no problem with digestion or constipation.

All in all, I love my SkinnyMint teatox experience and I am giving the product :yes: :yes: :yes: :yes: :yes:! I also cannot wait to get back to my 28-Day teatox as soon as I am done writing this review, hoping to shed a few inches on my waist soon.  😉

nice to know you wednesday #7

when sahmone speaks: my son living the life i've lived