Revisiting The World of Harry Potter With The Cursed Child

My birthday came early! ?? Thank you dear brother for this very early gift! Haha! ??? There are mixed reviews about the latest installment of our most beloved book series, but as for me, I am just simply delighted to read all about Harry and his friends again after sooo many years! The plot may have gotten ludicrous at some point, but it is still quite a good read, especially if you are a true blue #potterhead #harrypotter #harrypotterandthecursedchild #booklover #mumreads #myfavoritethings

The world of Harry Potter is suddenly abuzz with the recent release of Harry Potter And The Cursed Child. I caught wind of National Bookstore’s pre-reservation promo and immediately told my brother Ken about it, which is a wise move as a lot of eager readers had trouble securing their copies on the release day. We got our hardbound copy a few days after the worldwide release and I was poring over its pages several days after.

I read a number of mixed and dismal reviews about the latest installment on the story of our favorite wizard, but I did not allow that to dampen my excitement. It wasn’t your usual Harry Potter book as only a small portion of it was written  by JK Rowling and if you were expecting the same experience as with the previous 7 books, then you are in for more disappointment. On a lighter note, this particular book is a very easy read, divided into 2 parts, one can easily finish this in 4-5 hours. Veering away from the narrative, descriptive style that we’ve come to love from the previous Harry Potter books, this one is actually a special rehearsal edition script of the play with the same name that premiered at the Palace Theatre in London on 30 July, 2016.

Here’s a short summary of the book from goodreads.com:

It was always difficult being Harry Potter and it isn’t much easier now that he is an overworked employee of the Ministry of Magic, a husband and father of three school-age children.

While Harry grapples with a past that refuses to stay where it belongs, his youngest son Albus must struggle with the weight of a family legacy he never wanted. As past and present fuse ominously, both father and son learn the uncomfortable truth: sometimes, darkness comes from unexpected places.

Personally, I thought the book did not live up to the hype. Neither did it live up to the legacy its 7 predecessors left, but putting all that aside, it is still a good experience to actually hold a new Harry Potter book in my hands after so many years. Even though I believe they could’ve given Harry a better father-son relationship with his son, Albus, a small consolation after he willingly volunteered his life to save wizard-kind from Voldemort, and they sure could’ve given the adult Ron a better character, reminiscent of his heroic exploits in the last few chapters of the 7th book, I am still delighted to have read this book and revisited Harry Potter’s world. It brought me back to those nights many moons ago when I was younger and was just discovering the wonders of Hogwarts through these books. For allowing me to relive that beautiful experience, I give this book  :yes: :yes: :yes:, and, yes, I am in the process of re-reading this book. I am done with the first part and would read the second one as soon as my busy mum schedule allows me or when I am done reading about MF’s tube stack.

Since last year, I have been meaning to join an art workshop {I’ve been seeing loads of calligraphy and watercolour works on my Instagram feed, I was dying to learn how to do them!} but most are held in far-off places or are priced too steep for this cheapskate mum! So when Mommy Bloggers Philippines invited mums for their Mommy Bloggers Watercolour Workshop with The Crafters Marketplace a few months back, I excitedly signed up!

The workshop was held at The Crafters Marketplace at Shangri-la Mall’s Rustan’s Supermarket. It is conducted by teacher/visual artist/graphic designer Ian De Jesus. You can check out samples of his beautiful work on his Facebook Page, facebook.com/artofianravenfox13. You can also follow @ravenfox13 on IG. 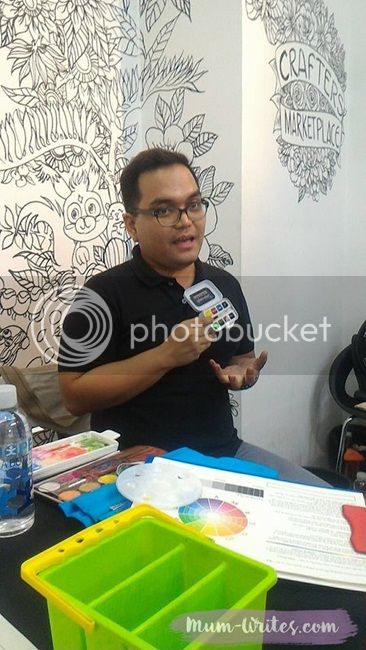 Ian started our session with a brief background about art and introducing his tools of the trade to us. He has numerous kinds of brush, ranging from the most affordable to the most expensive in different sizes for specific usage, as well as a number paints. According to him, the more expensive the paints were the more pigments they have. As expected these expensive paints with more pigments yield more beautiful and colorful results. He also suggested the watercolor brand Simbalion for those who are just starting to explore the beautiful craft of watercolour. He also told us a short history of how difficult it was to acquire colors in the olden age and how some painters and artists actually fell sick and eventually died due to exposure to harmful chemicals and ingredients present in the paints. He enthused that we are luckier nowadays that we can easily acquire these art materials in bookstores and arts and craft shops.

Ian also introduced us to the color wheel, but unlike the basic ones we were familiar with in grade school, this color wheel is more complex, with lots of other colors. Knowledge of the color wheel, according to Ian, will come handy especially to those who are just starting since it will serve as our guide to which colors complement each other and which colors do not go well together. He said that most companies use the color wheel as their guide in creating brand logos, as well as in displaying their products in supermarket isles.

How To Raise Digital Natives: Advice On Age-Appropriate Technology

Raising children in this digital age can be rather tricky and can also take its toll on us parents. Children are easily drawn to them, and as parents, who almost always want to keep our children happy, we tend to give in more often than we intend to. Read on for a few tips and tricks on how we can get these devices and technology to work to our advantage and to benefit our children more.

Digital devices have become major tools that we utilize in everyday life. You and your family likely have many devices within your home that are reflective of our current tech boom. As you raise your digital natives, you must be prepared to introduce and orient them with various forms of technology. It’s important that you guide and monitor your child’s interaction with devices like the television, computers, tablets and smartphones. Each device is classified with varying degrees of age-appropriateness, educational benefits and potential negative effects. Here is a list of digital devices your kids will encounter and an exploration of their pros and cons:

Television is commonly thought of as an entertainment device that merely provides an escape. However, there are many benefits of television, as it can engage the viewer and transmit information quickly. Educational videos are wonderful resources for kids ages 3-17 years old. However, pediatricians say that television shouldn’t be watched before age two. The American Academy of Pediatrics (AAP) found, from a study in 2011, that children under 2 years old can’t cognitively comprehend what’s being projected on the screen and retain that information. Recently though, the AAP has begun to change its tune on knowledge retention from television use. They acknowledge that kids can learn and benefit from television if it requires interaction ~ which many new generations allow for. Interactive responses transmitted through touch or speech response can induce learning and create solid connections in your baby or toddler’s brain.

A computer is one of our best resources for exploration of information. Your child will be required in many educational settings to use a computer and the internet. Create solid boundaries and rules around computer use so the device doesn’t become harmful or used for the wrong reasons. Make sure your kids are old enough, around the age of five or so, to understand that food and beverages can’t be around the computers. Have special security settings on the internet, so they have limited access to the world wide web. There is unlimited content on the internet, a good portion of which is explicit and inappropriate for kids. To help, PCMag has compiled a list of the best parental control software which monitor and filter internet content.