I received a copy of Nina the Neighborhood Ninja for review earlier this year. Children’s books are my fave as they are the most colorful with equally interesting stories, and are easy to read, too!

Nina the Neighborhood Ninja in a nutshell

The books is penned by Sonia Panigrahy who is a public health professional, world traveler, adventure seeker, and a fitness enthusiasts. The lovely illustration, on the other hand, was done by Hazel Quintanilla Campos, born in El Salvador and an international award-winning artist and graphic designer. It is an ideal read for children aged 4 to 7.

This is the synopsis of the book:

Calling all girls to find their inner superhero!

Nina the Neighborhood Ninja is a creative and take-charge kind of little girl who is smart, strong and speedy. Fiona the Firefly is her loyal and trusty sidekick. She uses her brain and her muscles to complete rescue missions. She doesn’t mind getting dirty and climbing trees. It’s all part of the life of the everyday girl superhero.

Through teamwork and bravery, Nina and Fiona spend a typical day boldly rescuing animals in trouble: a baby bird fallen from its nest, a cat left out in the rain, and ‹ just when Nina thinks her work is done ~ she’s called to action again!

There is no way I can give up the passion, though, even with time constraints, so every year I set out to read as many books as I can and challenge myself to stick to the goal. Often, I fail on the reading splurge but what’s good is I can always try {and so can you! ;)}. This year, I have no grand plans about reading as many books, though. In fact, I am making it more achievable by aiming to read only 50 books this 2017! If you will do the Math, that’s equivalent to reading 1 book per week.

For my very first read this year, I chose this children’s book which my brother, Ken, bought as gifts for his godchildren for Christmas. One child was not able to get his gift and it left us with the opportunity to open and peruse the book. One page and I am hooked! I read this in one sitting since the book is comprised of only 110 pages!

The Day We Rode The Rainbow Book Review + A Giveaway 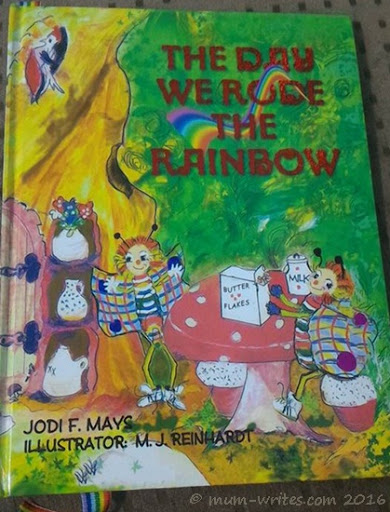 I was sent a copy of the book The Day We Rode The Rainbow by Jody F. Mays to review a few months back. Books are my absolute loves and I will not pass on the chance to share with you another children’s book that you and your children might find interesting.

The Day We Rode The Rainbow in a nutshell

The lazy + gloomy weekend is just about the perfect time to curl up with the kiddos + read a nice book.Review of The Day We Rode The Rainbow by #jodyfmays + your chance to win your own copy is up on the blog next #weekends #bookreview #booksforchildren #raisingbookworms

This colorful, whimsical book is a story about 2 butterflies and their friends. It is an interactive book that tackles friendship as well as respecting each other’s differences. It teaches children about being friends with anyone, even those who are different.

Here is the synopsis at the back of the book:

Step into this beautifully illustrated story, introducing a world of imagination and immerse yourself into a day of play with a group of butterfly friends ~ and one who was different. Experience a small world come alive through rich, happy colors and whimsical drawings. Enjoy an interactive, fun story about finding friendship, self-acceptance, and tolerance while the friends strive to “ride the rainbow” and learn new things about themselves. Come and let this magical group of butterfly buddies entertain your while they explore their small world with you ~ and attempt to fulfill their dreams.

Here are a few sample pages from the book:

I was previously invited to the launch of Scholastic’s Geronimo Stilton Academy Pawbooks held at Greenbelt 4 last 22 August, but I was not able to make it because of the bad weather. It was fortunate that Scholastic generously sent me samples of the workbooks to feature on the blog today.

The little man and I have yet to discover Geronimo Stilton and his adventures, but I have read and heard good stuff about this book series from other mum friends whose kids are crazy over these books. The Geronimo Stilton series, intended for children aged 6-12, is a best-selling children’s book series written by Elisabetta Dami, a famous Italian children’s books writer. Originally published in Italy, Scholastic has been publishing its English version since 2004. The books featured autobiographical adventures of journalist, editor and best-selling author, Geronimo Stilton and his sister, Thea Stilton. From time to time, the books also feature the siblings cousin, Trap, and Geronimo’s favorite nephew, 9-year old, Benjamin. According to Wikipedia, the Genonimo Stilton series became the most popular children’s books in Italy and has since been translated into 35 different languages.

#scholasticph recently launched its #GeronimoStilton Academy Pawbooks based on the beloved Geronimo Stilton series. A review of these #vocabulary + # comprehension pawbooks will be up on the blog next. #books #childrensbooks

I just got paid to review a product! Join me @intellifluence and you can too!