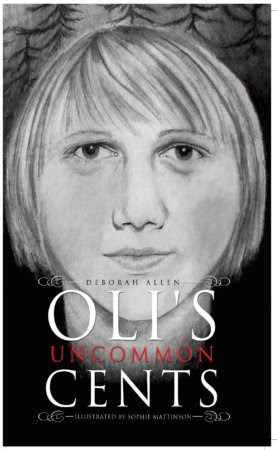 Money talks, we just have to learn to listen. — Olivia Marie Swank

I received a copy of Oli’s Uncommon Cents a few weeks back for review. I meant to post it on my blog sooner so that I can share the wonderful story with you my dear readers, but, alas, the little man’s high fever + mum’s sickness afterwards prevented me from spending much time online to work on my post. Anyway, here comes my long-overdue post + I do hope you read until the end as a little surprise will be waiting there for you {hint, hint}! 😉

All about Oli + her Uncommon Cents:

Here’s what the synopsis at the back of the book says:

Through the life + death of her grandfather, 12-year-old Oli receives a pouch that holds the lives of abandoned, but unique coins, coins adopted by her grandfather – and now hers. Beating their mint inscription, In God We Trust, Oli’s coins entrust their lives with her as she searches for the matters of the heart.

Set in Northern Idaho, near the Clearwater Mountains, Oli’s Uncommon Cents take readers on the unique journeys. These journeys introduce Oli to people who live in the back woods until winter snows drive them out, like the wildlife, all driven by hunger; these journeys introduce Oli to those who count on the charity found in Cardboard City — + journeys among the ordinary people, people with scars, some hidden, some visible, + others revealed, especially after their lives become intertwined.

Despite the tensions with controlling + egotistical father, she manages to venture on an exploration of her own, + what she discovers are people that her father scorns.  Oli’s explorations lead to life-changing lessons, + he most profound discovery is that some things in life have greater value than they’re worth.

I would also love for you to read the synopsis that was sent to me by the author via e-mail:

Oli’s Uncommon Cents is about a young girl, Oli, who is 12 years old, and a die-hard-tom-boy.  She is given a coin pouch and discovers there are five living coins inside.  Together, Oli and her coins explore much more than places, they explore life.  One of the most visited places they visit is Cardboard City, the local homeless shelter.  Much to her dad’s dislike, Oli finds refuge among those who have nothing.  Her dad feels his reputation as bank president is compromised by having his daughter visit the company of such, “vagrant wanderers”.  To create even greater tension, Oli carries her coin pouch in her shirt pocket, and is often found talking to her coins.  Her dad thinks she is becoming delusional, and makes a threat that changes Oli’s life, and the future of her family.  Readers will follow Oli and her coins as they explore the world of money, and adventure, and learn the importance of self-worth, and how a person’s own worth can affect others. They will discover that a person’s character is often directly related to the choices they make, and all too often, the choices they make with their money.  Throughout the book there are ethical issues for young readers to consider, and perhaps as they do, they will better understand how money can create misery, or hope, in a person’s life.  Oli’s Uncommon Cents is written with a dramatic yet fanciful and humorous presentation, but seizes the opportunity to teach young people about the vices of greed and the wake of mistrust, fear and apprehension it leaves in its path.  In contrast, young readers will be warmed with the valuable sense of self-worth, generosity, trust and confidence.  Oli’s coins become her beloved companions, they teach her that, “money talks, you just have to listen”.  Who else to teach the value of money, but money itself.

All about the author:

Oli’s Uncommon Cents is writer Deborah Allen‘s  very first children’s novel. She has been a business owner for 30 years + when finance burnout sets in, she set off to pursue another passion, writing for kids. Deb is a children’s advocate for many years + have volunteered to champion children’s causes in different forms: as a camp leader, a Sunday school teacher, youth sponsor + a swimming coach. Oli’s Uncommon Cents is the union of her finance expertise and passion for writing. Illustrator Sophie Mattinson lends her creativity to create the book’s beautiful illustrations.

the golden pathway by donna m. mcdine, a review + a giveaway 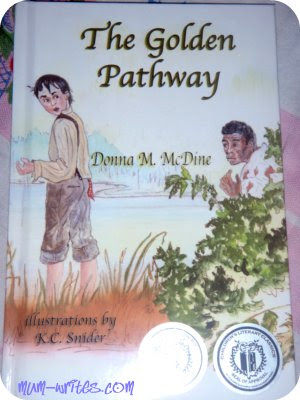 I received an interesting parcel from the mail last Monday + look what I’ve got ~ another book to review. + for a welcome change, it is a children’s books this time! 🙂

The Golden Pathway, written by award-winning author Donna M. McDine, is a 22-page hardbound book  {I finished it in a matter of minutes :)} that depicts the story of slavery + the Underground Railroad in America back in the days. This is A Literary Classics Award Winning Book + also has the Seal of Approval by the Children’s Literary Classics.

Raised in a hostile environment where abuse occurs daily, David attempts to break the mold + befriends the slave, Jenkins, owned by his Pa. Fighting against extraordinary times + beliefs, David leads Jenkins to freedom with no regard for his own safety + possible consequences dealt out by his Pa.

blaze of glory by m. garzon, a book review 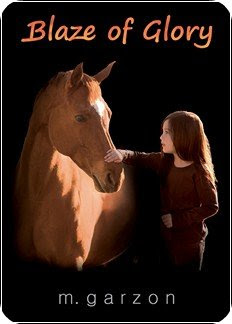 My fascination with horses started when I visited Quezon province all those many years ago, people have horses tied in their backyards all around. If I can afford it then, I would’ve probably bought myself one! Horses are such fascinating, gentle creatures that I am always in awe whenever I see one in the zoo or last year, when we just hailed a horse-driven carriage when we got out of Manila Ocean Park, just because. It was an experience worth having. The little man is just as fascinated with the horse as I was.

Having said that, I guess it won’t be surprising that I’d also jump at any books with horses in them + enjoy reading them, too! Just like this one from M. Garzon, Blaze of Glory. 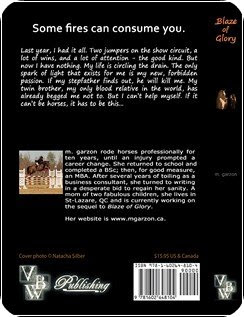 The gripping novel about horses, love, and the passions that consume us.