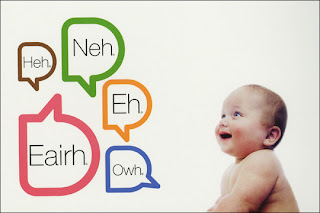 My little man’s vocabulary has improved a great deal since he turned 2.  But, although he can blurt out a couple of words that the grown up easily understands, like car + mum + daddy {which he sort of pronounce with a British accent, too!}, + of late, we’ve been practicing words like thanks, bye + water, he is still heavy on babytalk that often puzzles us + leaves us clueless. Sometimes, he completes a single  question {as most of them have rising intonation towards the end as if asking a question} + I would never understand a single word! It is as if he has a language all his own, that only he can understand.

It was a good thing, though, that I am getting a knack at understanding some of his blabber + his gestures so I can readily respond to his request, lest he will get all cranky + grouchy! Or sometimes he’d say something that sounds like the real word {like he’d say kes for thanks or tete for tita}+ we’d just laugh when realization hits us!

Here are a few words with Jared’s babytalk equivalent:

Sometimes he’d even surprise us by saying words that he’d hear from us all of a sudden. Like there is one time, I said bag {referring to his tita‘s bag} + he just said “bag” in a very clear grownup-speak out of nowhere. + the other day, i was so surprised that while we were about to watch starfall camp , he just exclaimed B, referring to the big blue letter b that showed up on screen. + am sure he recognized the letter, as there is no way he’d have heard the word, as I have not turned on the speaker of the computer when he said it. You should’ve seen me, this mum was beaming with pride 😀