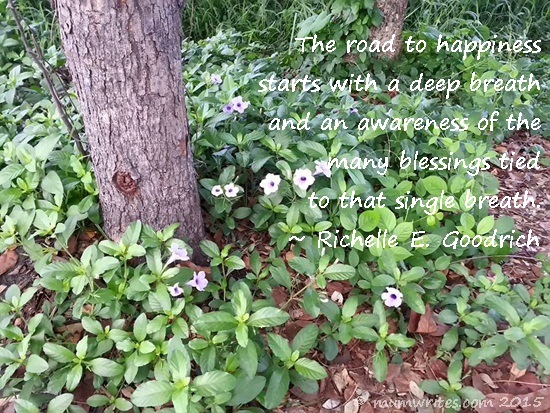 I must be getting old as every time my birthday approaches, my thoughts are filled not with wishes that I hope to come true on my special day but of gratitude and thanks for all the blessings I am getting from Above since Day 1. In my 36 years, I have long realized that after all that I have been through in life, I was truly blessed to be living the life that I am living now, to be able to witness my son grow up each and every single day, to be there for my little man especially when he needs me the most instead of being tied up to a desk or a headset-and-a-computer. I am very blessed to be doing what I love doing and that is to be a mother to my son and to write, even when I am currently neck-deep with deadlines and backlogs on this blog.

It is a good night’s sleep away from my very special day and today I thank the Universe for these:

Truly, there is so much to be thankful for if we only look around us closely with an open heart. What are you thankful for today? 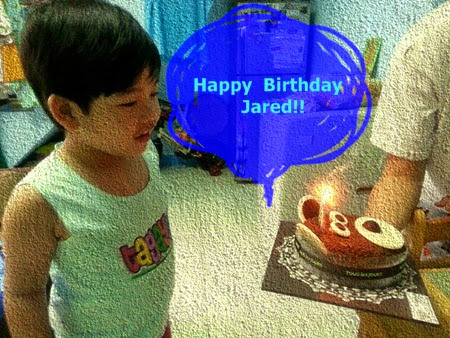 “Where did the time go and how did you grow into this not-so-little man from the little baby you used to be?”

I ask these questions each time your birthday approaches. I guess we were too busy having an adventure, laughing, or arguing that I often disregard the minute details until they are screaming to be noticed, like how your feet get that big, or where you get the words you are blurting out, or where did you ever get those quirks. 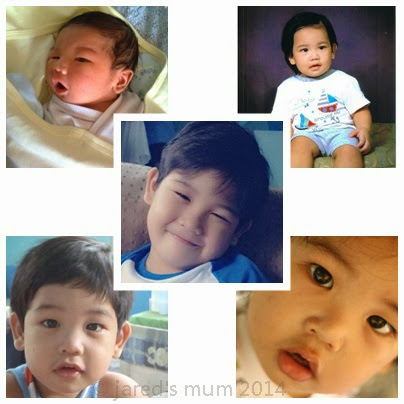 Today you are celebrating your 5th and I wish you all the happiness in the world your little heart can contain. I wish for you to continue to bring your own ray of sunshine wherever you may go. I wish you continue to be your own unique self and blossom into a wonderful, God-fearing young man you are meant to be. I wish that the Lord will always bless and nurture you.

The little man had been wanting to see this new Disney movie, Planes, since he first saw the trailer on youtube. That is why on his very special day, we decided to go to Manila and watched the film as part of our celebration. After a hearty lunch at Aristocrat and a short visit to the toy store, where the little man got a complete set of Teenage Mutant Ninja Turtles action figures, plus another new Cars diecast, as his birthday gifts, we then trooped to the cinema to finally see the film.

The characters in this movie are rather familiar as it was made by the same guys who created our favorite Cars film and this was a spin-off of our beloved Lightning McQueen adventures.

Planes in a nutshell

The film is all about Dusty Crophopper and his dream to be a high-flying air racer someday. The problem is as his name suggests, Dusty is not built for high-flying and racing as he is a simple crop duster plane. Even his mechanic friend, Dottie, advise him against it. But this will not dishearten Dusty, together with his friend, Chug, they practiced hard through the night so he can join the qualifiers for the upcoming race, Wings Across the World. Come race time, he wowed the audience and the contestants alike with his well-maneuvered moves and his bold flying. Unfortunately he came in 6th in the race where the first 5 qualified. But a sudden turn of events led a representative of the qualifier  to Dusty’s town  bearing the good news that he is now in 5th place as the original 5th placer was disqualified due to illegal activities.  Dusty then set out to train with navy war plane, Skipper, and worked on his speed and agility in preparation for the contest.

During the race, Dusty made friends with the eccentric Mexican race-plane El Chupacabra and fell in love with another race plane, Ishani. He also bumped into fellow racers, Ripslinger, who is the crowd favorite, as well as the beautiful French-Canadian racer, Rochelle.

The race brought Dusty and his fellow racers to different parts of the world, from New York to Iceland, to Germany, to Agra in India where they visited the Taj Mahal, to Nepal, to Shanghai, from Pacific Ocean to Mexico, and finally, back to New York for the finish. At the beginning of the race, Dusty started slow and always ended up last. Although, he slowly gained popularity among the racers and the spectators with his commendable show of sportsmanship and concern to his fellow racers. Towards the middle of the race, Dusty slowly gained speed and started placing in the race. And even when Ripslingers’ sidekicks, Ned and Zed tried to thwart him too often, he managed to land top spot in the race.

Dane Cook gives his voice to Dustry Crophopper while other popular celebrities also lend their talent to give life to the other characters, including Teri Hatcher {Dottie}, Cedric the Entertainer {Leadbottom}, Val Kilmer {Bravo} and Anthony Edwards {Echo}.

Why We Love The Film

Everybody loves the underdog so I bet everyone will love Dusty Crophopper and his adventures, the little man + I did! His story is one that inspires anyone to persevere and to work hard to be successful in the end. Also, apart from showing an all-too-familiar landscape and with the tractors making a cameo, Planes is very much like the movie Cars and Cars2, you’d expect Lightning McQueen and his friends showing up at any given time. The friendly yet fierce mechanic Dottie also reminds us of the lovable Guido.

The little man also enjoyed the lovely songs played throughout the film.

Go watch it with your little ones, if you haven’t already!

I am glad that even when I do not have a regular job and online opportunities for my mum blog is getting scarce since Mr. G took away my pr, I still manage to save up for the little man’s simple birthday celebration at his playschool. I was able to save up Php7,000 from last month’s work, which I thought was just enough for the party I have in mind.

It was Jared who gave me the idea about his party’s theme while he was playing with his minion toys one day. He said he’d put the minion on top of a cake and proceeded to singing the Happy Birthday song. When I asked him who’s having a birthday, he answered “Jared,” so a light bulb flickered to life in my mind. Minion birthday it is!

As early as the first week of August I was already busy creating my birthday party checklist and scouting for items both online and off that I thought I could use for the party. I have also scoured a lot of minion-related Pinterest boards and got tons of ideas from them!

A minion cake and a bunch of cuppies were on the top of my list. Fortunately, I do not have to look far to find the perfect cake maker. I ordered Jared’s sweet birthday treats from the local shop Just Sweets and even the little man was delighted with his minion cake!

As usual I commissioned my brother to make the birthday invites, the banner, as well as the thank you stickers which I used to lock my loot bags. He printed the stickers and the invites, while I have the tarp printed in a local bookshop a day before our party.

I made my own loot bags from yellow colored papers I got from the bookstore and put these printed minion eyes I got from another Pinterest board, for finishing touches, and viola! I now have my very own affordable and cute minion bags! I filled them with these minion toys I got from an online shop on Facebook and these minion felt keychain I chanced upon at a local mall in our city. I also added a couple of scented colored pens that I am sure the kids will love!

To make our celebration more fun, I planned some fun activities for the kiddos at playschool. With my sister Cel’s help, we cut these create-a-minion cut outs for the kids to make and I printed a number of minion color pages for the children to color. I also got those printable page online.

Minion stuff are rather difficult to find, so for our piñata, I diy-ed a minion one out of a 100-peso-plus Spongebob piñata I got from this Divisoria-like shop I discovered at Maunlad Mall {thanks to sis Jhona, one of the mums at playschool, for graciously offering to accompany us there}. I also bought 6 stationery set for boys and girls as prizes for our party games there. Bel cut out a yellow colored paper for the minion body of our piñata, as well as a blue colored paper for its cover-alls, and pasted a couple of these minion eyes print outs to create our very own minion piñata! We filled it lollipops, candies and chocolates for the children to enjoy at the party.

For the food, we just ordered one-piece chicken/spaghetti meals from Jollibee. I opted for pineapple juice for the kiddos, too.

Here is the summary of my expenses for my son’s party: