of garages + getting a family car

Buying your own car might just be anyone else’s biggest goal in life. Who does not want to have the luxury of having a car at your disposal + enjoying the comfort of going to just about anywhere you fancy at the time you wanted to. Simply bliss, right? Of course some say it is fairly easy to purchase a car or a van big enough for one’s growing family. You find a reputable agent, withdraw the needed amount for down payment + let your bank handle the rest through your pre-approved car loan! Easy-peasy!

Not everyone would agree, though, + nearly not everyone can afford to pay for a down payment, much more get car loans from banks approved! It would take a few more years for an ordinary employee working in a reputable company with just above-minimum salary, for example, to save enough for a 10% down payment. On top of that, you also have to worry about other car-related issues that might just crop up once you decide to buy your own car including car insurance, driver’s license, + if you happen to not have one of those garages equipped with a roller shutter garage door nationwideltd.co.uk {like the one photographed above} on standby, you also have to worry about parking + parking fees, too! You cannot simply park your new car outside your house where it can attract the attention of passersby, or worse car-nappers or car-jackers! Add to those concerns the cost of car maintenance, oil + gas prices, as well has toll fees!

Having said all that, it is actually best to plan your car purchase very carefully. If you think the advantages outweighs the disadvantages + the problems that might come up along the way, by all means go for it! Getting a family vehicle, is after all, one of the best gifts you can give to your family + yourself!

why buying used cars can work to your advantage? 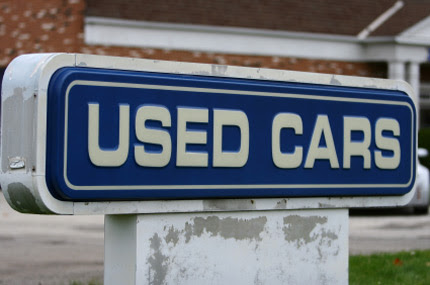 I must admit buying something new, may that be toys, clothes + cars, is actually the most ideal thing to do. But, sadly, even when most of us would like to own brand new stuffs, not most of us can afford to pay for them + that is when plans to buy pre-owned, pre-loved or used items become a much more practical option.

I am sure you will have gone on a litany on how buying new cars will always have more advantage over purchasing used ones, but here are a few considerations you might ponder on, in case you are having second thoughts on that pre-owned Honda Civic or those St George used cars but do not have the budget to get that brand new Chevy:

June 6, 2011 3 Comments
My son recently developed this fascination with cars. + with cars, I don’t only mean Go Mater + Lightning McQueen, of the Cars 2 fame (which I intend to watch with my son as soon as it opens here ;)). Yes, the little man breaks into peals of laughter every time the screen shows that hilarious introduction between Mater + McMissile. I am not sure if he appreciates the humor this early, though. But one thing I am certain of – he adores Go Mater!

I also mean his toy cars, which he absolutely love! As of now, he has 2 toy cars + a Toy Story train part of sort which makes for an improvised car + an alphabet-musical toy, in a shape of a car (which led the little guy to think that it is, indeed, a car too!) He plays around with these toy cars, rolling them up the side of his playpen or in our bed. He also has his first car (the type that is big enough for him to sit on, much like the real deal) which he rides around the house every single time he gets the chance to.

Apart from that, whenever we’re out, you’d normally see him crane his neck so he’d have a better view of the road + gleefully announced “car!” whenever he sees one zooming by.  He would also try to work his way to the driver’s seat where his dad sits + plays with the steering wheel + the horn whilst waiting for mum to go out of the house.

And to top it all off, bonding time between dad + baby includes watching all these videos on car racing + Race car driving experiences on Youtube!

What is it really with cars + boys? My baby can’t get enough of cars, even Jared’s dad is also car-crazy, talking about his cars most of the time + would even consider giving names to his precious cars! Crazy, right?

Well, I guess this shows that regardless of size + age, boys will always be boys 😉