this mum is out of order 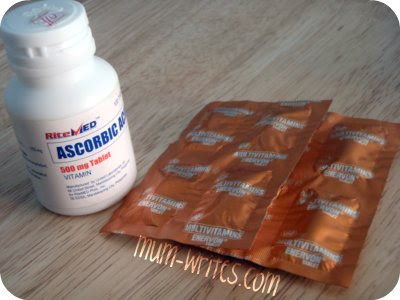 That’s right! + if I could put up the sign around my neck, I would!

This mum has been sick on + off for more than a week now, waking up in the wee hours of the night to a slight fever, a little shiver + a burning sensation in my throat that makes swallowing a pain! + it was the most trying days of my mummy-life! Not only was I struggling to feel better, but I also have the little man to look after 24/7, not to mention a number of house chores that won’t simply be driven off by an out of order sign. Imagine taking care of your sick self while trying to keep up with a rambunctious toddler who is constantly beaming with too much energy. I was dosing at one end of the sofa while looking after him play with his matchbox on the other end, late Saturday night {we were just waiting for my sister to arrive as she had to do a quick errand} that I failed to notice he’s deserted his beloved toys in favor of the more appealing screen door {which he can now open successfully}. Glad I awoke in the nick of time. I do not have the strength to imagine what would’ve happened if I didn’t! I actually made a mental note to install additional locks on the screen door somewhere he’d never reach. + made sure Jared has no off-the-playpen playtime while mum was sick!

I am rarely sick so I am not comfortable + familiar with the feeling of being lousy on my toes + the constant nausea {which I have only felt when I was pregnant} + lethargy. + what i despise the most is that uncomfortable feeling of having to drag yourself to do tasks which you normally do, bathing + washing up the little man, for example, turned out to be quite a herculean task when I use to do it with ease all the time! I figured mums should not be allowed to get sick!