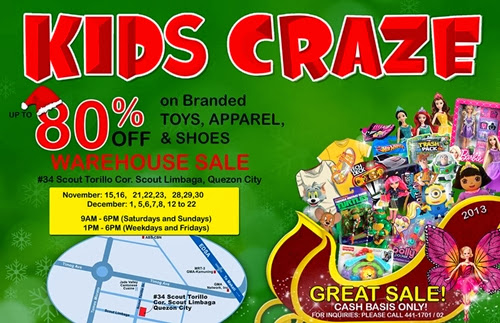 Christmas time is upon once more and if you are looking for the best place to shop for branded yet affordable toys, apparel and shoes for kids, there is no better place to visit than the Kids Craze Warehouse Sale. They have opened the Warehouse sale in November and will continue this December 1, 5, 7, 8, 12 until the 22nd between 9AM-6PM during weekends and at 1PM-6PM during weekdays and Fridays at #34 Scout Torillo corner Scout Limbaga in Quezon City.

They have popular kid brands like Barbie, Chicco, Hotwheels, MegaBloks, FisherPrice, Vtech and a whole lot more. Most items are up for sale at 80% so it will truly give more value to every mum’s shopping money and will enable them to buy more toys than they originally planned to. I am sure mums will find a lot of great Christmas gift items for their kids loved ones from the place, too! I have always wanted to check it out ever since I learned about this warehouse sale but have not had the chance to do so, hopefully we can do it this year if our schedule and pocket will allow us. Am eyeing the MegaBloks toy as the little man is currently taking a liking to those building blocks, which I am sure will work wonders for him. 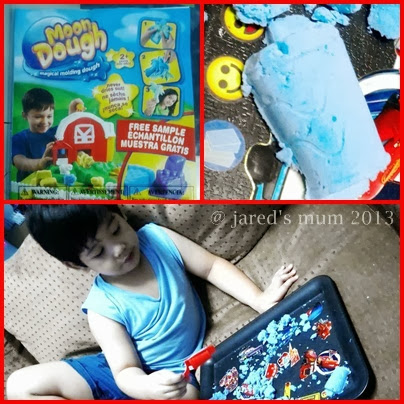 Incidentally, RichPrime Global Inc., the company behind the Kids Craze Warehouse Sale, was also one of the businesses who participated in this year’s Blogapalooza. I got a  sample pack of their Moon Dough from the event and the little man was more than excited to try it out. We poured the molding dough onto his tray and he quickly went on to make these cup-shaped molds. 🙂

For more information about their warehouse sale and the products they carry, you may contact RichPrime Global Inc through:

How To Keep Children Preoccupied During Rainy Days

The recent habagat paired with typhoon Maring allowed for our unintended house arrest. Classes were suspended in our city and even when they’re not, I wouldn’t brave the heavy rains and risk for Jared to catch any disease. Unwilling as we were, we have no choice but to revel in our time cooped up at home until the storm and the inclement weather passed.

It is a good thing that I found a perfect preoccupation for the little man, the games and apps on my mobile phone. But if truth be told, I’d rather he bury his nose in one of his books than to enjoy any of those games {I know I am such a party pooper :(} Good thing he agreed to play only for a few hours each day and that I discovered this kid-friendly game of memory and puzzles with his favorite Cars 2 characters in it.

The first two days he found joy in watching a number of his favorite cartoons on the telly but on the third day, he suddenly lost interest and wanted to do something else. We occupied ourselves for a bit watching the big pitter patter of the rain from our window, we also took the sudden rest from the downpour to check out the water building up on the streets just in front of the garage. The little man is fascinated with the rainy and those muddy puddles.

I actually have a number of activities in mind to keep my little man occupied, like storytelling or coloring or playing with his clay. {If you are a mum of an impressionable almost-4-year-old, you will be well off to have the Smart Parenting’s 150+ Fun & Creative Activities For Kids so you will never run out of ideas, and pray that your children like them and cooperates :)}

While keeping myself occupied keeping abreast of the current weather condition and the progress of relief operations in different key cities in the country, Jared had a sudden inspiration and went to his bin of old toys, unearthed his partially-damaged toy train and decided to play with it. Most of the parts are still okay even though the train itself won’t work anymore. I had to repair a few carriages with a double-sided tape and off the little man went to play with it!

I wonder what else will catch Jared’s fancy next, in the meantime, I am just glad I have Minion Rush and other mobile games to keep him occupied during those boring days.

How about you, what do you do to keep your little bosses occupied?  🙂 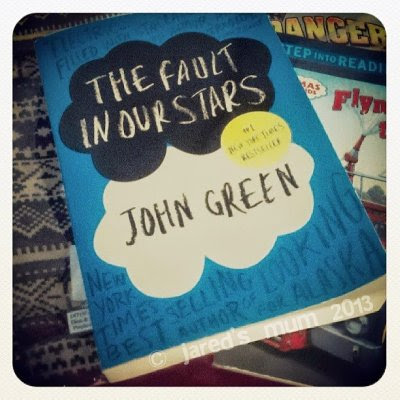 I got a couple of vouchers from Lazada.com.ph which I used to order a couple of stuff for me and the little man just recently. Jared’s 4th birthday is fast approaching so I decided to get him this Cars 2 double decker transporter bus which he wanted to have for quite some time now. I also ordered a couple of Thomas the Train books for my boy, as well as a book and a jeggings for myself.

I am a first time Lazada shopper and for the pleasurable experience, I think it will be my go-to place whenever I need to do some online shopping. What I love about it? The site is so easy-peasy to use that even children can buy from them. True to their word, they offer 2-day delivery to places like ours which is quite near but is out of bounds from Manila. The items are neatly packed and placed in pouches, or in boxes in case of fragile items like cosmetics and tin lunch boxes. And what’s even better is they even offer free shipping on almost all items. Shopping with Lazada not only make shopping convenient and stress-free for us mums, it also allows us to have good value for our hard-earned money with various discount and appealing offers.

Just recently Lazada tied up with another industry giant, Megalink,  check out the rest of the press release here:

The country’s biggest online shopping mall, Lazada, is officially the only e-Commerce company in the Philippines accredited by MegaLink, a major ATM Network in the country.

Purchasing goods at www.lazada.com.ph is now made easier as the recently signed partnership introduces a first in local e-Commerce. It allows online shoppers all over the country to conveniently choose a payment option most convenient to him/her, adding MegaLink to Lazada’s proven and flexible existing methods: Cash On Delivery, Credit Card, Installments and PayPal.

CEO and Co-founder InancBalci states, “We, at Lazada, want to continuously improve the shopping experience for our customers. MegaLink payment option will make shopping at Lazada more convenient. Customer satisfaction is our top priority.” Through this new payment method, customers can pay for their orders using their MegaLink ATM and Cash cards.

Lazada will shoulder all service charges making this feature a very enticing option to the millions of Filipinos bearing cards within the MegaLink network.

Thanks so much Lazada for such a pleasurable online shopping experience. I give you :yes: :yes: :yes: :yes:  for a job well done. And thanks for my latest haul, too. Even my little man loved them!  :heart: