A family in Opol, Misamis Oriental is showing there is hope for peace in Mindanao. Through their advocacy of non-violent communication among Muslim and Christian faiths, the Mambuay family has been spreading peace and awareness nationwide, most especially in war-torn areas. Currently, they are conducting various peace seminars, particularly in Cebu and Bacolod, as well as teaching and nurturing less fortunate children.

The Mambuay family is only one of more than 35 families who have been recognized by Jollibee, over the years, for their generosity, compassion, and a genuine concern for their fellowmen through its annual Jollibee Family Values Awards (JFVA). Now on its 6th year, the campaign continues its search for Filipino families who have made it their mission to help others with their advocacies. These families come from diverse backgrounds and social classes, and no matter how simple or ordinary, they serve as everyday heroes to uplift the lives of others.

Another JFVA awardee is the Capilos family of Quezon City. Winning a Special Citation for Education award in the 5thJFVA has given the family a much-needed publicity boost that has enabled them to gain more awareness for their advocacy as well as the trust of educators, in holding free trainings for public school teachers and students. These days, the family is determined to continue their advocacy to include other localities nationwide. They also strive to put more focus on the gains of the public school teachers. “We want to concentrate on the public schools in our vicinity so we can monitor the improvements in the teachers’ skills and leadership,” said Jelson Capilos.

Mums are much like shepherds, won’t you agree? We are our children’s guide in helping them become better individuals and at the same time preparing them for when it’s time for them to grow up and face the world on their own. It is a mum’s duty to ensure that her children are heading the right track while giving them ample space and time to learn on their own and establish their individuality.

This is the same philosophy of Welch’s latest efforts that I am excited to share with you today. The world-famous grape juice brand just came up with a cute game, Trail the Bunch, recently. Basically the principle of the game is to help the Good Grape find its way back to the Good Bunch. Easy-peasy, right?

Here are the mechanics of the game:

Prizes up for grabs: 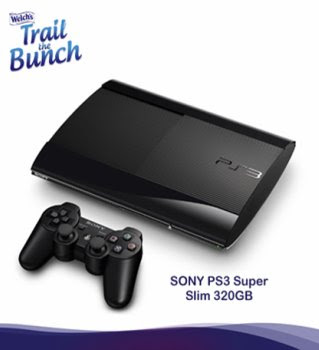 Those who complete all levels and register get to qualify for the weekly raffle of Welch’s Gift Packs. Top Scorer of All Time will get a chance to win a Sony PS3 Super Slim!

I just tried the game and this looks like something I can thoroughly enjoy. I am not at Level 3! Earning points is really easy, too!

Superman fans unite! Schick razor has come up with a special edition Superman-marked packs as Man of Steel hits the big screen on June 12.

Transform yourself with Schick by buying any Man of Steel-marked razor packs to get a chance to win free movie tickets in SM Cinemas this June as 250 buyers of these special packs can get two free tickets each.  Consumers can also get a chance to win exciting limited edition Superman premium items such as speakers , headphones, key chains,  and notebooks.

To join, visit www.schicktransform.com/manofsteel. Enter your name, home address, phone number, email and the product barcodes indicated on the promo packs to participate in an electronic raffle draw.

Prizes will be drawn electronically every week beginning May 20, 2013 until August 31, 2013. All winners will be sent an official notification via registered mail, and their names will be posted on www.schicktransform.com/manofsteel and www.schick.com.ph.

Prizes may be claimed at the offices of AXENT Inc. at 4/FRepublicGlassBuilding, 196 Salcedo Street, LegaspiVillage, MakatiCity.  Prizes of provincial winners will be sent via courier.

For a clean, well-shaved look and masculine confidence, the Schick-Man of Steel pack is a great skincare toolkit. This new product offering from Schick is a tribute to the upcoming Man of Steel movie, directed by Zack Snyder. Promising to bring a new Superman for a new generation, the movie offers a fresh take on the iconic Super Hero, played in the film by Henry Cavill.

Schick razors offer a simple and effortless shave making it more of a less hassle-free skin care regimen.  Each shave will leave your skin feeling clean, smooth, comfortable and rejuvenated.

Fans will get to see the new film in all local cinemas this June 12 2013, while those wanting to get his manly looks and confidence can grab the Schick-Man of Steel pack in supermarkets, health and beauty, convenience stores, and other retail outlets nationwide. Per  DTI-NCR Permit No.1843 Series of 2013.

About Man of Steel

From Warner Bros. Pictures and Legendary Pictures comes Man of Steel, starring Henry Cavill in the role of Clark Kent/Superman, under the direction of Zack Snyder.  Man of Steel is produced by Charles Roven, Christopher Nolan, Emma Thomas and Deborah Snyder.  The screenplay was written by David S. Goyer from a story by Goyer and Nolan, based upon Superman characters created by Jerry Siegel & Joe Shuster and published by DC Entertainment.  Thomas Tull, Lloyd Phillips and Jon Peters are serving as executive producers.  Warner Bros. Pictures presents, in association with Legendary Pictures, a Syncopy Production, a Zack Snyder Film, MAN Man of Steel.  The film will be released in 3D and 2D in select theaters and IMAX® beginning June 12, and will be distributed worldwide by Warner Bros. Pictures, a Warner Bros. Entertainment Company.