The little man had been wanting to see this new Disney movie, Planes, since he first saw the trailer on youtube. That is why on his very special day, we decided to go to Manila and watched the film as part of our celebration. After a hearty lunch at Aristocrat and a short visit to the toy store, where the little man got a complete set of Teenage Mutant Ninja Turtles action figures, plus another new Cars diecast, as his birthday gifts, we then trooped to the cinema to finally see the film.

The characters in this movie are rather familiar as it was made by the same guys who created our favorite Cars film and this was a spin-off of our beloved Lightning McQueen adventures.

Planes in a nutshell

The film is all about Dusty Crophopper and his dream to be a high-flying air racer someday. The problem is as his name suggests, Dusty is not built for high-flying and racing as he is a simple crop duster plane. Even his mechanic friend, Dottie, advise him against it. But this will not dishearten Dusty, together with his friend, Chug, they practiced hard through the night so he can join the qualifiers for the upcoming race, Wings Across the World. Come race time, he wowed the audience and the contestants alike with his well-maneuvered moves and his bold flying. Unfortunately he came in 6th in the race where the first 5 qualified. But a sudden turn of events led a representative of the qualifier  to Dusty’s town  bearing the good news that he is now in 5th place as the original 5th placer was disqualified due to illegal activities.  Dusty then set out to train with navy war plane, Skipper, and worked on his speed and agility in preparation for the contest.

During the race, Dusty made friends with the eccentric Mexican race-plane El Chupacabra and fell in love with another race plane, Ishani. He also bumped into fellow racers, Ripslinger, who is the crowd favorite, as well as the beautiful French-Canadian racer, Rochelle.

The race brought Dusty and his fellow racers to different parts of the world, from New York to Iceland, to Germany, to Agra in India where they visited the Taj Mahal, to Nepal, to Shanghai, from Pacific Ocean to Mexico, and finally, back to New York for the finish. At the beginning of the race, Dusty started slow and always ended up last. Although, he slowly gained popularity among the racers and the spectators with his commendable show of sportsmanship and concern to his fellow racers. Towards the middle of the race, Dusty slowly gained speed and started placing in the race. And even when Ripslingers’ sidekicks, Ned and Zed tried to thwart him too often, he managed to land top spot in the race.

Dane Cook gives his voice to Dustry Crophopper while other popular celebrities also lend their talent to give life to the other characters, including Teri Hatcher {Dottie}, Cedric the Entertainer {Leadbottom}, Val Kilmer {Bravo} and Anthony Edwards {Echo}.

Why We Love The Film

Everybody loves the underdog so I bet everyone will love Dusty Crophopper and his adventures, the little man + I did! His story is one that inspires anyone to persevere and to work hard to be successful in the end. Also, apart from showing an all-too-familiar landscape and with the tractors making a cameo, Planes is very much like the movie Cars and Cars2, you’d expect Lightning McQueen and his friends showing up at any given time. The friendly yet fierce mechanic Dottie also reminds us of the lovable Guido.

The little man also enjoyed the lovely songs played throughout the film.

Go watch it with your little ones, if you haven’t already!

We rarely plan a family activity on Saturdays since Jared has playschool on those days but this Saturday was an exception. We were supposed to go out yesterday to watch the movie, Turbo, but we were not able to do so, so we moved it for today. The little man wanted to see this film about snails who race so we trooped to SM Baliwag to finally watch it.

The mall was packed with shoppers because of the 3-day sale, but it was a good thing fast foods, as well as parking spaces, are not too cramped that we were able to park promptly and find an available table at McDonald’s in no time. We’d almost always choose Chowking since they have healthier food options and Jared just love their Pancit Canton, but after ordering his usual for takeaway, we headed to McDonald’s so that we can grab him a few Smurfs toys.

After having our stomachs filled, we headed to buy our movie tickets. It was still an hour or so before the movie started so I whisked my two boys to my favorite shop in the world, the bookstore, to look around. I was planning to buy some craft supply like colored papers and glue, which I shall be using for the little man’s birthday celebration.  Of course, I also made sure to get a stash of postcards, while we were there.

After paying at the bookstore’s till we proceed to the second-floor cinema. We are just in time as the last screening’s credits are just traversing on the big screen. The little man was all eyes as the movie played on.

Turbo is all about a small garden snail, Theo, who dreams of becoming a great racer just like his favorite Indianapolis 500 champ, Guy Gagne. His passion for anything that involves speed makes him the odd one out in the usually cautious and slow snail community, and a constant source of disappointment to his brother, Chet.

In his constant need for speed, he found himself on the road one night, taking a road trip courtesy aboard the zooming cars! One thing led to another and he landed on a drag racer’s car engine and had his DNA infused with nitrous oxide. The once-dreaming-of-speed snail became a speedster, zooming past everything in his wake. He went back to his snail community to share the good news with them but it all led to a catastrophe with a bike careening into the garden and destroying a big portion of their lazy little community. He was fired from his garden crew duties and was  ordered to leave the group because of his never-ending misdemeanors. His brother, Theo, whom he saved from pesky crows, was also fired from the garden.

Tito of Dos Bros Tacos found the unsuspecting garden snails and brought them to their lack luster strip mall and got them to race with a gang of other snails, led by Whiplash and his crew Burn, White Shadow, Smoove Move, and Skidmark. Human and snails alike were dazzled by Theo’s unbelievable speed and he instantly gain the respect of his new community. The ever-cautious Chet, meanwhile, was only reeking with disapproval for Theo’s new venture.

Meanwhile, Tito thought of one ambitious yet seemingly outrageous idea ~ he will enter his precious snail to the Indianapolis 500 race! Theo, who’ve christened himself, Turbo, was so excited about the idea and cannot wait to give the famed Indiana race track a go! They overcame a number of hurdles before Turbo was finally allowed to run the race.

And what do you know, the little snail won, beating 25 seasoned race care drivers, among them his ultimate favorite Guy Gangne and became quite a sensation! But did I say it was not his ultra-speed that won him the race? Oh well, that’s what you have to find out when you go see this film with your little ones. END_OF_DOCUMENT_TOKEN_TO_BE_REPLACED 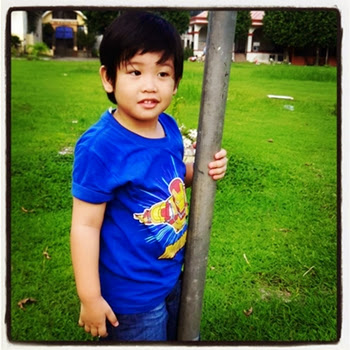 We’ve been cooped up at home the past few weekends because of the downpour, that is why we set to go out this Sunday and make the most of the sun. We headed to my parents’ house to visit my sister. It has been ages since we have been here and despite the clutter, I really miss this warm and familiar place I call home. My sister, Isabel, recently quit her job so she’s staying at home for a considerable number of hours each day. Although I wished for her to land a new job soon, I also hope she will find the time to get some cleaning and fixing done around the home! ^_^

It has also been awhile since we visited my parents’ grave so we wasted no time and headed to the memorial after a few hours. My son always enjoys our visit here. That is why even when he was cranky and very sleepy, he did not fail to run and explore around. He was also very willing to have his photographs taken and gamely posed for the camera.

After an hour, the little man was urging all of us to go to Waltermart. I did tell him yesterday we are going to watch the movie Turbo with his titas today. Apparently, we are a bit pressed for time if we will be watching the movie, since it was already late when we get to the mall. We just decided to eat dinner at Greenwich.

After a few errands, we all agreed to go home and called it a day. The little man enjoyed going out and spending some of his boundless energies. Even when it is such a hassle, I do enjoy taking him out instead of staying at home all day Sunday, glued to the telly. Hopefully we can do this again next week.

How was your weekend? I hope you had a fruitful and enjoyable one like we did! ^_^

The last time we went on a movie date was when we watched The Croods last month, so I am really excited to go and watch another film again! This time we went to see Iron Man 3 and I guess you can tell that even I was excited to see it. After all, I have loved Robert Downey, Jr. since his Ally McBeal days, way before he transformed into his ultra-mega hot superhero alter ego!

This movie date was also special since instead of just me and the little man watching {which is almost always the case}, we’ve tagged along Jared’s dad and my dear friend Moi, along with her son Rylan, one of Jared’s buddies.

It was Jared’s dad who bought our tickets for the first day screening of the film and lucky enough he was able to secure our slots for the Block Screening of Iron Man 3 at Cinema 7 of Trinoma! As expected, people were already stalking outside the cinema entrance way before the 5PM screening. It was a good thing we decided to come early. We had enough time to grab a quick snack before waiting for Moi and Rylan to arrive and lining up to gain entrance. Jared and Rylan passed the time having their photos taken by the movie poster and playing around like little boys their age love to do.

Excitement and anticipation is in the air when they finally beckoned the people to enter the cinema. Even our two little men cannot hide their excitement.

Iron Man 3 in a nutshell END_OF_DOCUMENT_TOKEN_TO_BE_REPLACED