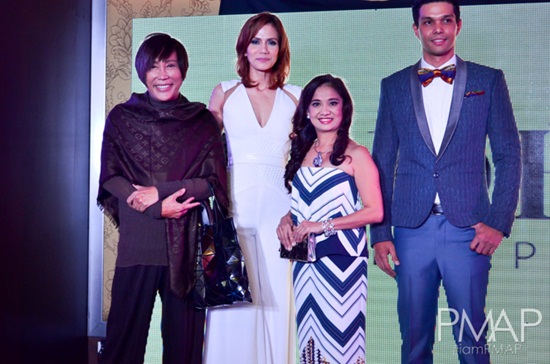 In response to what they believed were conditions in the fashion-modeling industry that needed to be professionalized, top-caliber models founded the Professional Models Association of the Philippines, or PMAP, in 1987. They sought for reasonable working hours and standardized compensation for model bookings. “As a union we are vocal with our rights.  As an association, we have a vision of what we want to become in the future,” says one of the original members, Tina Maristela-Ocampo, who co-founded the organization with co-models Ronnie Asuncion and Robert David.

PMAP is the very first of its kind in Asia, and probably the world. It is the only organization of models run by models themselves, each confident of their own talents, abilities and capabilities to manage and plan their modeling careers. Established on February 11, 1987, the PMAP aims to “uplift, protect and professionalize the modeling industry in the Philippines, and to develop and stabilize, national and international awareness, participation, involvement and competition in the field of modeling.” END_OF_DOCUMENT_TOKEN_TO_BE_REPLACED My fashion sense is very elementary ~ I always go for what is simple and comfortable. I am basically a tee-and-pants-or-shorts kind of gal and would normally pair these with my ever comfy fabric sandals. I wear this ensemble to just about anywhere, especially if I am out with the little man as it is much easier to run after an energetic boy clad in the comfiest of clothes and shoes.

Of course, sometimes you have to make exceptions and give up the comfy sandals in favor of a lovelier and more fabulous pair of footwear, especially for special occasions like birthday dinners or formal social functions. Those occasions may be far and few, but it cannot hurt to be prepared for such, right? I stumbled upon the Zaful website the other night while I was busy preparing the little one’s exam reviewers and I did enjoy browsing through their numerous fashionable shoes. Not only will they flatter any mum’s feet, they are also reasonably priced making them very ideal fashion finds for fab yet budget-savvy mums.

Here are my Top 3 picks from Zaful

Sexy High Heels Stiletto Pumps ~ I may not be a high heels kind of mum but this pair did speak to me. I love the color and how it makes any feet sleek and sexy. This will spruce up a simple pair of jeans and can also be worn with a little black dress for a more formal occasion. I would love to add this pair to my small shoe collection.  END_OF_DOCUMENT_TOKEN_TO_BE_REPLACED