United Laboratories, Inc. {UNILAB} officially welcomes multifaceted celebrity Ian Veneracion as the newest addition to their roster of brand ambassadors. Veneracion, who currently stars as the male lead in ABS-CBN’s primetime show ‘A Love to Last,’ has been chosen to advocate for Conzace, the number one prescribed brand for multivitamin plus minerals by general practitioners and dermatologists in the country.

“It is an honor and privilege to be part of the UNILAB family for its multivitamin brand, Conzace,” proclaims Veneracion while adding, “I am grateful for this opportunity, and I strongly believe that the product can be beneficial to millions of Filipinos as it has been beneficial to me.”

According to Conzace assistant product manager Mike Jimenez, the addition of Veneracion is a perfect match for the brand. “Ian is the epitome of superior immunity and good looks,” he says.

Jimenez elaborates on the actor and the product’s connection. “Conzace’s clinically-proven ZACE formulation, an acronym for Zinc, Vitamins A, C, and E, makes it the number one multivitamin and minerals product prescribed by General Practitioners and Dermatologists. The same can be said about our brand ambassador, Ian, whose credibility allows him to ace his craft with one successful teleserye and movie after another.”

The Face Of Conzace

People born in the late ‘70s would remember Veneracion as the cute and charming Jeffrey Laperal, the son of Joey de Leon in the 1982 sitcom ‘Joey and Son.’ From then on, he went to appear in more television projects while simultaneously making films that range from comedy to drama to action. Among his most recent work is the internationally acclaimed psychological thriller, ‘Bliss,’ and a Filipino independent supernatural horror film, ‘Ilawod.’

Now at 42, Veneracion has again endeared himself to today’s generation as Engineer Antonio “Anton” Noble IV, the dashing, separated with three kids guy who falls in love with another broken soul. And of course before, as Eduardo Buenavista in the 2015 remake of ‘Pangako Sa Yo,’ the role that regained Veneracion’s fame and his career to leading man stature.

And then there’s that totally different side of Veneracion that is separate from showbusiness. Apart from being an actor, he is also a painter, an athlete, a pilot, a chef, and a family man—the last being his favorite role to play.

But to be all that, Veneracion needs a multivitamin and minerals that will help him cope, not just with his busy schedule, but with the different roles that he has to play in life. “I need strong immunity as well as healthy skin and hair, I cannot afford to get sick, and look stressed—I am glad I have Conzace to give me all that and more.”

Compared to other multivitamins, Conzace has the highest levels of ZACE combined. All these elements play different roles in one’s well-being.  “This unique formulation in Conzace creates a synergistic effect that is clinically proven to help boost immunity, promote healthy skin and hair, and assist in wound healing as it speeds up skin regeneration,” says Jimenez.

Veneracion, speaking from experience, explains it better: “It’s the little things that we don’t normally notice, like for example, stronger resistance against colds and flu, better and clearer skin, shinier and healthier hair. It will do amazing things; you can do more and be more for yourself, for your family, for your work without being disrupted.

“I believe that if you are healthy inside, it just comes out. It reflects physically—in your hair and in your skin. And in the line of job that I am in, it is quite important that I don’t just don’t look good but really be healthy,” Veneracion concludes.

Now that the rainy season is back, and the sniffles and other diseases that come along with it, it really is a must to be in our optimal health to ward of sickness and be in our tip top shape. Whether or not you take vitamins and supplements to help, it is also important to exercise, keep a balance diet, do activities to help lessen the stress of day-to-day life, spend time with nature, and spend more time with your families! Here’s wishing everyone good health! 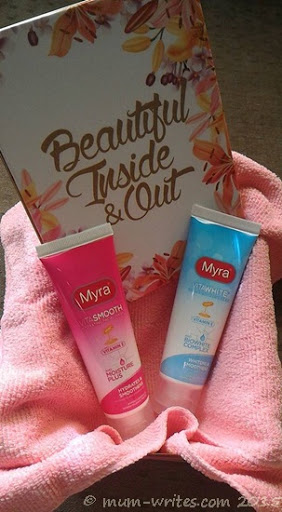 The Christmas season is the busiest month of all, and staying beautiful inside and out ought to be in the least of our concerns when we have a gazillion of other things to worry about. Thanks to the new Myra Facial Wash products, it is now easier to care for our skin and look our best.

I was recently sent a 50ml tube each of Myra Vitawhite Whitening Facial Wash and Myra Vitasmooth Hydrating Facial Wash to try. The package comes in this lovely Beautiful Inside & Out tin box.

This is a moisturizing facial wash enriched with antioxidant Vitamin E beads to protect and nourish the skin and help keep it healthy with a youthful glow. It also has a Moisture Plus formula to help retain and seal in skin’s natural moisture and keep it more supple and hydrated. Apart from those, it also contains French Spring Sea Water and Aloe Vera Extract to improve skin elasticity and keep it smooth and young-looking. SRP of a 50ml tube is Php70.00 and this is highly recommended for use especially during the cold December days when the skin tend to be rough and dry.

This whitening facial wash has Biowhite Complex derived from plant extracts that gently whitens skin. It has Niacinamide that helps even out skin tone by reducing red blotches making the skin more radiant. It is also enriched with Vitamin E beads to protect and nourish the skin. SRP of a 50ml tube is Php75.00 and I recommend this facial wash for those with blemishes and uneven skin tone. 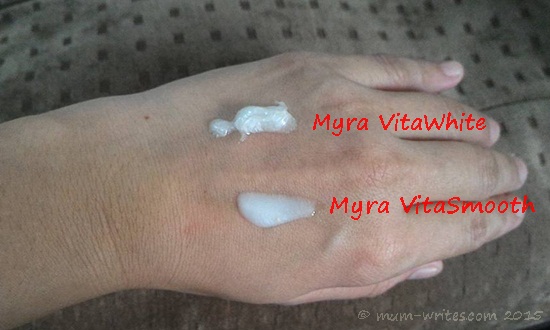 I have only tried both products twice and I love them based on my initial experience. I love the subtle scent and the squeaky-clean after-feel. Myra VitaWhite Facial Wash has a thicker consistency compared to Myra VitaSmooth and it tends to be more lathery. Both washes make the skin supple and smoother after each use. Currently, I am trying VitaSmooth in the morning and VitaWhite at night.

I love that Myra Facial Wash variants are very affordable and economical, too, as you only need to put a small amount to cover the entire face and neck. I also love that they are made by one of my most trusted brands, Unilab, and that they are hypo-allergenic and dermatologist-tested to be safe for everyday use! I thought they would also make for perfect stocking fillers for my gal friend and for the little man’s teachers this Christmas!

To know more about this product, check out their latest TVC featuring Kylie Padilla:

For more information about Myra Facial Wash, you may also visit their Facebook Page, facebook.com/MYRAPhilippines 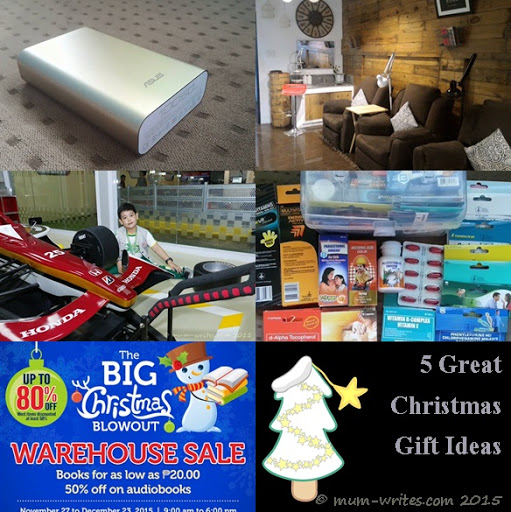 Can you believe it is just a few weeks before Christmas? Our most favorite time of the year is finally here and yes, unfortunately, it is also the busiest, and for some, the most stressful. But do not let all the excitement and the many lists of things-to-do, not to mention the horrendous traffic everywhere, dampen your excitement about the merriest season of all.

Here are a few thoughtful Christmas gift ideas to get you started with your Christmas shopping:

We do not really have to shell out a ton of money to make our gifts for our loved ones this year unique and special. A little touch of creativity, a ton of thoughtfulness, and making sure the gift is tailor-made for the receiver and I am certain your Christmas gift will be a big hit! Enjoy spreading the holiday cheer! 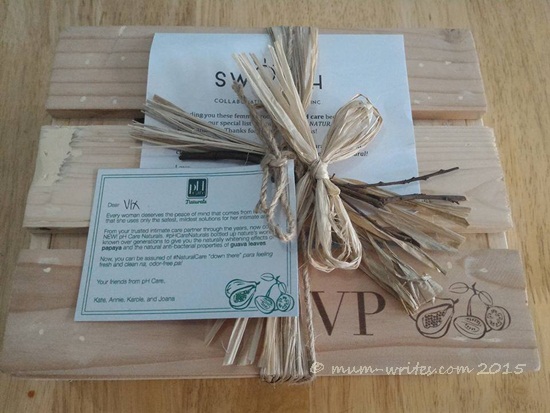 I have never been more conscious of the brands and products I use until I became a mum, not only did I opt for all-natural products to touch the little man’s skin, but I have also turned to natural products for my personal use. That is why I am delighted to find out that Unilab came out with the all-new pH Care Naturals Intimate Wash line. Of course, I am equally delighted to receive samples of these products so I can try them out. Hands down to whoever conceptualized their package as it has 2 of my favorite things ~ personalized items and natural products. What more can a girl ask for, right?

The beautiful wooden box labeled with my initials contain the all-new pH Care Natural products in two variants ~ Guava and Papaya. I was sent both the 150ml and the 50ml bottles for both variants. 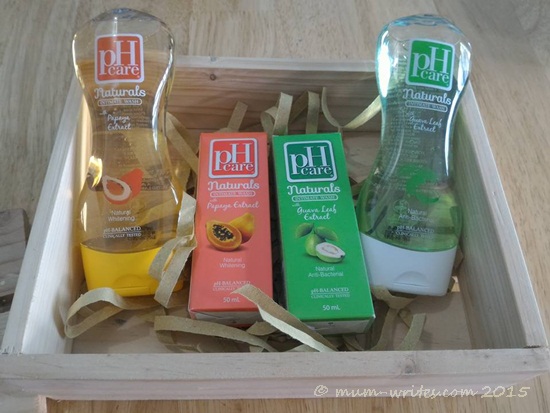 Yes, the dark skin around the feminine area is a definite confidence-killer. Even when other people are oblivious to it, most women find it a cause to worry, and even when there are many skin whitening products out in the market now, there seems to be limited options when it comes to products specifically designed for the women’s intimate area.

It is such good news that pH Care came out with its new pH Care Naturals Papaya. Powered by papaya extract, known for its skin whitening potency, pH Care Naturals Papaya variant not only helps you keep the sensitive area fresh, but also makes it fair in the gentlest and most natural way, as it promises to give you fairer skin in as early as 14 days! 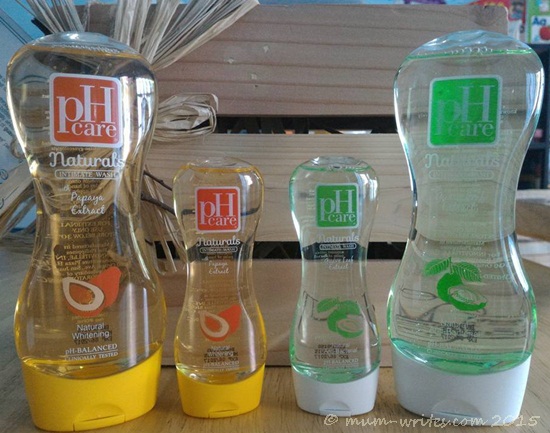