I meant to share this 52-Week Gratitude Challenge here for my weekly Thankful Thursday posts, but forgot to save or bookmark this image. Good thing I rediscovered this a few days ago on Pinterest. I know it is rather late to start a 52-week challenge now that it is already March, but better late than never right? And any day is as good as any to begin and nurture an attitude of gratitude.

So why start this challenge again? I thought it would be great to have these prompts for my weekly Thankful Thursday posts. I thought it would be so much like hitting 2 birds with one stone, finishing the challenge and making regular weekly entry for my gratitude list. Win-win! Plus, having a ready prompt will definitely inspire me to write about my list of gratefuls regularly instead of groping for topics and subjects for each week. 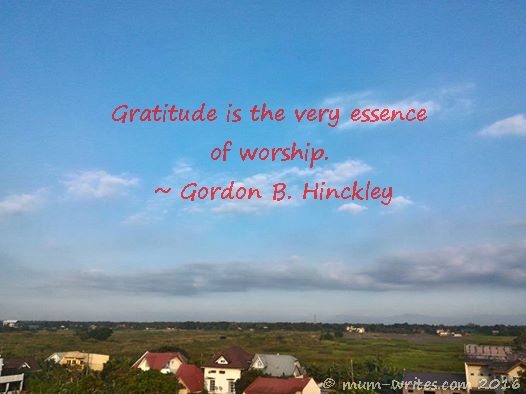 I am definitely starting my gratitude challenge this month and to start off here is a long list of what I have been grateful for the first few months of 2016:

I first read about One Word last year when I chanced upon it on a fellow mum blogger’s site. It was too late then to choose for my 2015 word, but if I had chosen one, it would no doubt be grateful as I have practiced to be more grateful and was mindful to be thankful for each and every blessing that I received last year.

It took awhile for me to choose my One Word for this year as I have been having difficulty choosing between a couple of my options, including connect, create, and blessed. In the end, something led me to one word that I hope would best describe 2016 for me ~ flourish. It was rather apt as I intend to flourish in different aspects of my life. I would like to flourish as a mum, as a wife and a life partner, a homemaker, as a sister, as a blogger, and as a budding gardening enthusiast {and I hope for my plants to flourish as well} I would also love to flourish in my relationships with significant people in my life, as well as flourish in my creative pursuits for this year.

According to Google, flourish means a number of things, including:

So, yes, I am claiming this to be my One Word for 2016 with a prayer that my life, as well as the lives of the people I touch as I journey on, flourish as much as mine.

What is your One Word for this year and what are your reasons for choosing it?