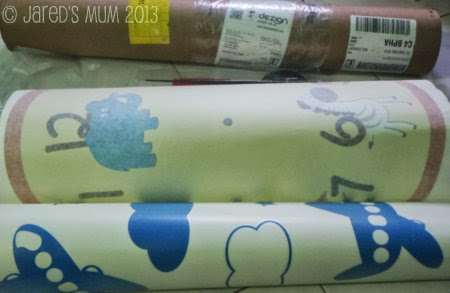 Another blessing came in the mail recently. This time it was my prize from Working Mama and Dezign with a Z Giveaway! I won a $30 Gift Certificate to be used on Dezign with a Z shop for any item I might fancy. It was really hard to choose as they have a lot of interesting items available and I wished I can buy a bunch with just one gift certificate!

In the end, I chose this uber cool airplane/stars/clouds kiddie room wall decal in blue {to go well with our blue room} which I plan to put on our bedroom.

The item arrived shortly after I have placed my order and I went to work and placed it on our bedroom one lazy evening. The little man loved it!

I was also fortunate that Dezign with a Z agreed to give me another item for free in exchange for my review. I chose this wall decal clock, this time, which I plan to put in our living room. This item was shipped together with my giveaway prize. I shall be featuring it on a review post next.

Thank you Working Mama and Dezign with a Z for our new awesome wall decal!

On the day of the EDSA Revolution anniversary, while everyone else were contemplating where they were and what they were doing on the 25th of February, 1986 to commemorate the event, the little man and I was headed to Makati City, Zeta II Building in particular, to claim my prize from Phillips recently concluded promo. I joined The Peach Kitchen’s giveaway and surprises of all surprises, I won the 07 February daily draw. I got a Philips Dock.

The trip to Makati was particularly smooth even when we had to take public transportation that day. It was probably because I was just trying to beat the 2-4pm specified pick-up time so I decided we leave home a bit late. We actually arrived a few minutes after 4 and I am glad that they still entertained us. Blogger Ferds, who also works in the pr company, also went out of his way to welcome me.

To say that I am excited with my new toy is an understatement. We tried it as soon as we got home! The prize is perfect as my earphones were broken not too long ago. This new dock lends a new breath of life to my iPod which is now mostly sleeping on its storage for days on end. Now the little man can listen to our fave music and audio books whenever we want. I love its ergonomic round design, it can easily fit anywhere, and its design. It even has a built-in digital clock which allows me to check the time at a glance. It also charges the iPod while it is docked and even allows for another device to be charged at the same time using a USB cable. I am really loving my new toy!

Thank you Philips and The Peach Kitchen! 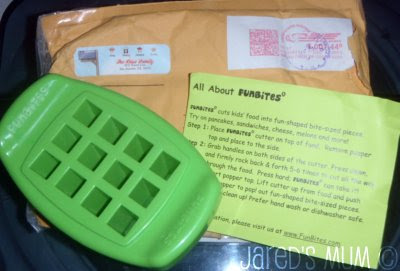 I guess I might’ve said many times before how much I love getting surprises from the mail. Oh well, today is but another one of those special days when the little man {with his dad, in tow} and I had to make a quick trip down to our local post office as I received a notice that a package is waiting for me there. We did that after our Thursday movie date and a quick bite at McDonald’s. I had no idea where this came from as I am not really expecting anything at the moment. 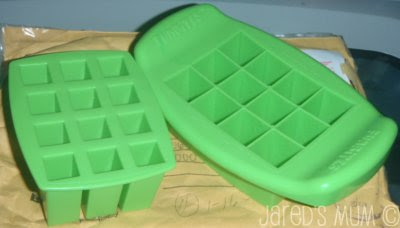 Turned out, it was the prize I won from Life’s Perception and Inspirations giveaway last year! Look what I got! A cool fruit cutter from FunBites! This is really such a surprise since the e-mail I got told me that I won a ring and a pair of fashion earrings. But I guess this one is way better as I can use it in my kitchen to cut the little man’s food.  Hopefully, with the help of this product, Jared will be a bit more keen on eating his solids

Thanks so much sis Demcy for this lovely surprise! ^_^

Sharing this with Blog Photo Challenge {11/356} and #fmsphotoaday 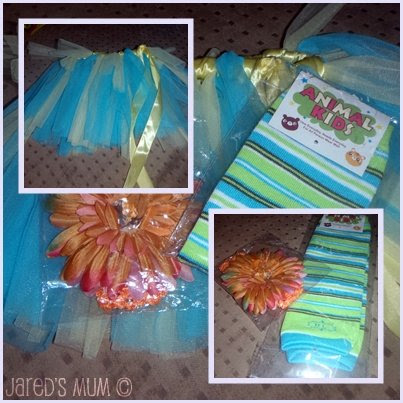 I won this beautiful prizes in June from the Sunsational Summer Giveaway courtesy of the Rebel Sweetheart. I was originally praying for the other prize package which includes a boy’s character Tee + I was hoping we could get a Lightning McQueen tee for the little man. Alas, I wasn’t as lucky! Seeing these stuff made me wish I had a little girl to put them on!

I gave the girly things to my niece + his dad said she is very much delighted to use them. She even had her long hair curled to match the dainty tutu! Oh, I just wish I had a photo of her wearing it!