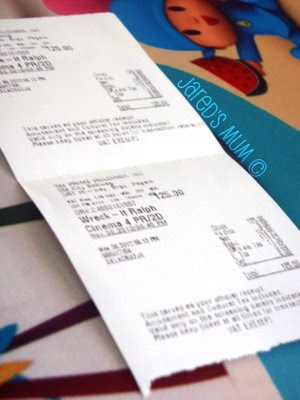 The little one has been excited to see the film Wreck-it Ralph since he saw the trailer on the telly + I told him that we shall be watching it in the cinema real soon. We were supposed to watch it last Saturday after our visit to my parents’ graves, but unfortunately the 6 o’clock screening that was originally posted on the cinema’s online site was deleted when we got to SM Baliuag. So our movie date was moved to Tuesday the following week, instead. Since people are no longer on holidays, it was only the two of us who trooped to the mall to see Wreck-it Ralph. We queued for the 6.45PM screening + made a quick bite first + run a few errands before going to the cinema.
There were only too few people watching at the time, maybe because it is a weekday or maybe because other people are opting for the James Bond film, SkyFall. Oh well, watching a movie with only several people in the theater felt like having the entire cinema all to ourselves + I just love it! The little man was on the edge of his seat as the excitement builds up + he cannot help but blurt out a rather loud “Wreck-it Ralph!” the first time the character appears on the big screen. Before the film started, we were also treated to a very touching + heart-warming shortfilm, Paperman. I simply love the story + the clean animation.
Jared was glued to the screen with a big smile on his face, especially in the race part {you know how much my little one loves cars!} + I say if only for that, the trouble of commuting several towns to reach SM Baliuag is all worth it! I did enjoy watching the film, too. It is colorful+ fun + it is one film, I bet the entire family will love. I would definitely love to see it again! ;)
I am just delighted that I have a movie buff little child, I know have a readily-available movie date anytime I’d like to watch a movie!
Wreck-it Ralph in a nutshell 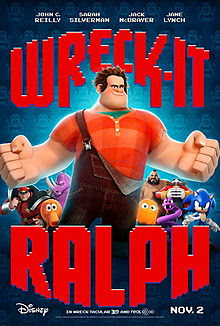 Ralph is a villain from a popular arcade game, Fix It Felix Jr. He was tired of being a villain for 30 years now + wanted to do something good. He set out to earn a hero’s medal + this is where the adventure begins. His quest to search for the elusive medal brings him to cross-over to other games in the arcade, including Hero’s Duty + the kingdom-made-of-candies, Sugar Rush, where he’d meet the diminutive yet determined glitch, Vanellope von Schweetz. The two of them became friends + worked together to create a race car {you make your own cars in Sugar Rush, much like making your own candies or cakes!} for Vanellope + trained so that she can win the race.
Ralph’s aspirations to become good put the entire arcade in jeopardy, but it was a good thing that he was also there, along with his friends, Felix + Jane {the feisty main character from Hero’s Duty}, to save Vanellope, Sugar Rash + the rest of the arcade. In the end, he made peace with being a villain + gain the love + support of the other characters in his game.
Mum’s two-cents
Save for some fight + shooting scenes {it’s a movie about arcade games, after all, what do you expect?} I would really recommend it for the little ones + the entire family. It is a good way to teach small children about good manners + friendship, too. Plus, am sure your little tykes will enjoy all the action + the color, not to mention the lovely songs, too! We stayed to finish up until the credits traversed as the little one enjoyed the songs much! ;)
second image is from Wikipedia
Spread the love